How much is Ben Gibbard Worth?

Ben Gibbard net worth: Ben Gibbard is an American singer, songwriter, and guitarist who has a net worth of $6 million. Ben Gibbard is probably most famous for being the lead singer for the band Death Cab for Cutie. Gibbard married to actress Zooey Deschanel in 2009 but the couple announced their separation in November 2011. Benjamin Gibbard was born in Bremerton, Washington in August 1976. He is best known as the lead singer and guitar player for the band Death Cab for Cutie, and as half of the duo The Postal Service. Gibbard studied engineering at Western Washington University. He appeared in the film Brief Interviews with Hideous Men in 2009. He released his only solo studio album in 2012. Death Cab for Cutie formed in 1997 and have released seven studio albums. Their 2008 album Narrow Stairs hit #1 in both the U.S. and Canada. Their most popular singles include "Soul Meets Body" and "I Will Possess Your Heart". The Postal Service formed in 2001 and broke up in 2005. They reunited in 2013. Their only studio album, 2003's Give Up, was #1 on the U.S. Dance charts. Their single "Such Great Heights" was certified Gold. Ben has also released three albums with solo project !All-Time Quarterback!. Gibbard also released an album with Jay Farrar from Uncle Tupelo and Son Volt. Before Death Cab he played guitar in the band Pinwheel. 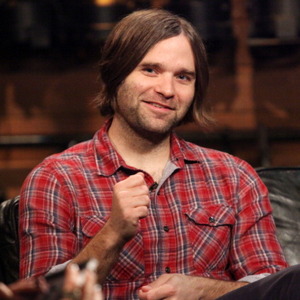