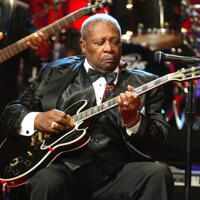 What was B.B. King's net worth?

B.B. King was an American blues musician, singer, guitarist, and songwriter who had a net worth of $10 million. King was born on a cotton plantation and sang in his church gospel choir as a kid. He got his first guitar at 12 years old. Working as a disc jockey and singer he got the nickname Beale Street Blues Boy. That nickname was shortened to Blues Boy, and finally to just "B.B".

He started recording songs in 1949 and then assembled his band the B.B. King Review. In 1970 he won a Grammy for "The Thrill is Gone". B.B. King's Blues Club opened in 1991 in Memphis and a second location launched in Los Angeles in 1994. Since then clubs have opened in New York, Connecticut, Tennessee, Florida, and Nevada. King was ranked by Rolling Stone as the sixth greatest guitarist of all time in 2011. In 1987 he was inducted into the Rock and Roll Hall of Fame. Until he got into his seventies he was known to perform as many as 300 concerts a year. He released over 40 studio albums and won 15 Grammy Awards as well as the Grammy Lifetime Achievement Award.

B.B. King was an American musician and singer-songwriter known widely for his popularity and influence in the genre of blues music. He has been giving the nickname of "The King of Blues" and has received wide recognition for his impact on blues music and incredible ability playing the guitar.

King was born Riley B. King on September 16, 1925 on a cotton plantation close to the town of Itta Bena, Mississippi. His parents, Albert and Nora Ella King, were sharecroppers. When he was four, his mother left the family and so King was primarily raised by his grandmother in Kilmichael, Mississippi.

King was primarily first exposed to music by attending church. He sang in the gospel choir at the local Baptist church and was also interested in the music services at the Pentecostal church, as the minister there performed on a guitar during the services and later taught King how to play a few chords. King began playing the guitar, aided in part by Bukka White, his mother's cousin, who went on to become a famous blues guitarist and singer. After working as a tractor driver for a while, King decided to follow Bukka White to Memphis where he eventually began to perform on the Sonny Boy Williamson's radio program. King's spot on the radio show become very popular and was where he first began developing a following.

As King was performing on the radio, he also became a regular in the blue scene on Beale Street in Memphis in 1949. There he would perform in a group known as the Beale Streeters. He then later formed his own band, the B.B. King Review, after he landed a recording contract with Los Angeles-based RPM records. He began touring the United States, playing small shows in Detroit, St. Louis, and Los Angeles, always developing more and more fans as he played.

In 1952, his song "3 O'Clock Blues" became number one on the Billboard Rhythm and Blues chart, which really helped his career to take off. The rest of the 1950s and 60s were filled with one chart-topper after another, with some of his most popular hits including "You Know I Love You," "Please Love Me," "You Upset Me Baby," "Every Day I Have the Blues," and "Sweet Little Angel" among many others. His success allowed him to perform at major venues, like the Howard Theater in Washington and the Apollo in New York. He maintained a busy and hectic touring schedule, playing 342 concerts in the year 1956 alone. 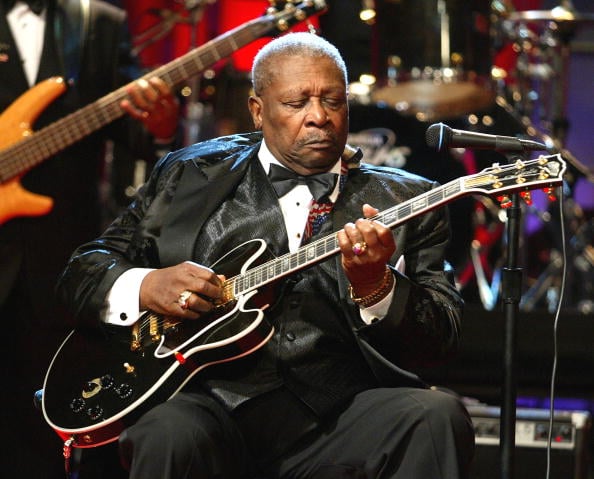 In the late 1960s, King further expanded his audience and influence under the direction of his new manager, Sid Seidenberg, who noticed the rising popularity of blues-style music among white audiences. King was able to book new venues and shows and amass an even greater following, especially after opening for the Rolling Stones on the 1969 tour. In 1970, he won a Grammy Award for his version of "The Thrill is Gone" which Rolling Stone magazine recognized as one of the 500 Greatest Songs of All Time.

Throughout his career, King received many awards and has been recognized as one of the greatest musicians of all time. In 1980, he was inducted into the Blues Hall of Fame and into the Rock and Roll Hall of Fame in 1987. In 2004, he received the Polar Music Prize, which is only given to exceptional artists who have advanced and created significant music. King continued performing even as he got older, going on a farewell tour in 2006 though he did not officially retire from music. In fact, he continued performing frequently and collaborated often with fellow musicians, like Eric Clapton. The two won a Grammy Award in 2000 for their "Riding With the King" album. Throughout the 2000s and early 2010s, King traveled the world, performing at many festivals and notable locations, such as the White House in 2012.

King's personal and romantic life was heavily affected by his demanding performance schedule. He married Martha Lee Denton in November 1946 but the couple divorced in 1952. He then married Sue Carol Hall in 1958 but their relationship also did not last, divorcing in 1966. While neither of the marriages resulted in any children, 15 children claimed that B.B. King was their father and an additional three made such a claim following King's death. Though the paternal relationships were not proven, King did not deny them and supported the 15 individuals claiming to be his children by helping them pay for college and creating trust funds.

During his life, King was involved in a number of philanthropic causes. He was an advocate of prison reform and was a co-founder of the Foundation for the Advancement of Inmate Rehabilitation and Recreation. He also recorded "Live in the Cook County Jail" in 1970 to help raise awareness for prison issues. He was also involved in Little Kids Rock, an organization that works in underprivileged schools to increase access to music education, as well as with diabetes awareness campaigns, considering that King himself was diagnosed with type 2 diabetes.

In 2015, at the age of 89, King passed away in his sleep. While two of his alleged daughters said that King was poisoned by business associates, there was no evidence of poisoning in the autopsy and the official cause of death was ruled to be vascular dementia after King suffered a number of small strokes, an effect of his type 2 diabetes.

Thousands of people lined the streets of Memphis to pay their respects to King on May 27, 2015 when the funeral procession traveled down Beale Street accompanied by a brass band. He was then laid to rest in his home state of Mississippi at the B.B. King Museum.