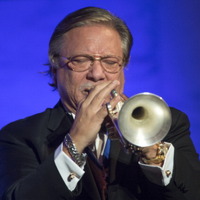 Arturo Sandoval net worth: Arturo Sandoval is a Cuban American musician and composer who has a net worth of $3 million. Arturo Sandoval was born in Artemisa, Cuba in November 1949. He is a jazz trumpeter and pianist. As a bandleader he released his debut studio album To a Finland Station with Dizzy Gillespie in 1982 and has released several other albums including Flight to Freedom, I Remember Clifford, Danzon, Swingin, Hot House, For Love or Country: The Arturo Sandoval Story, Rumba Palace, A Time for Love, Dear Diz (Every Day I Think of You), and more. As a sideman he has played on albums with Gloria Estefan, GRP All-Star Big Band, Dave Grusin, Ed Calle, and more. Arturo Sandoval defected from Cuba while he was touring with Gillespie and later became a naturalized citizen of the U.S. He has won 10 Grammy Awards and the Presidential Medal of Freedom from President Barack Obama.