What is Angus Young's Net Worth?


Angus Young is a Scottish-born Australian guitarist and songwriter who has a net worth of $160 million. A co-founder of the Australian hard rock band AC/DC, Young is known for his highly energetic performances, schoolboy uniform stage clothing, and the (re)popularization of Chuck Berry's "duck walk." The world's 14th best-selling artist with sales exceeding 200 million records, AC/DC has released 16 studio albums, and songs like "Highway to Hell," "You Shook Me All Night Long," "Dirty Deeds Done Dirt Cheap," and "Back in Black" have been staples of classic rock radio stations for decades. Their 25x Platinum 1980 album "Back in Black" is accountable for 50 million of those sales and is rated as the second highest-selling album of all time. "Rolling Stone" magazine ranked Angus #24 on their "100 Greatest Guitarists" list, and Young and his AC/DC bandmates were inducted into the Rock and Roll Hall of Fame in 2003.

Angus Young was born Angus McKinnon Young on March 31, 1955, in Glasgow, Scotland. His mother, Margaret, was a housewife, and his father, William, served as a flight engine mechanic in the Royal Air Force during World War II. Angus is the youngest of Margaret and William's eight children, and after 1963's "big freeze," the family moved to Sydney, Australia. Young attended Ashfield Boys High School but dropped out when he was 15. Several of the Young children were blessed with musical talent, and Angus first learned to play the banjo (after re-stringing it with six strings), then began playing a secondhand acoustic guitar bought by his mother. Young purchased his first Gibson SG in the early 1970s, and he has continued to use various Gibson SGs throughout his career. Gibson thanked him for his loyalty by naming a signature guitar after him, releasing the Angus Young SG in 2000.

In September 1974, Bon Scott replaced Evans as lead singer, and the band re-recorded their first single, "Can I Sit Next To You Girl," with him. AC/ DC's debut album, "High Voltage," was released in February 1975 in Australia and reached #14 on the ARIA Charts. Their follow-up, 1975's "T.N.T.," peaked at # 2 and was certified 9x Platinum in Australia. "High Voltage" was released internationally in 1976 and went gold or platinum in several countries. That year, the band also released "Dirty Deeds Done Dirt Cheap," which went 6x Platinum in Australia and the U.S. With 1979's "Highway to Hell," AC/DC reached a new level of success, finally breaking into the top 100 on the U.S. charts. Sadly, Bon Scott passed away from alcohol poisoning in February 1980, and the band recorded their next album, "Back in Black," with Brian Johnson on lead vocals. "Back in Black" went on to become AC/DC's most successful album, and only Michael Jackson's "Thriller" has sold more copies.

The band seemed to be losing popularity in the 1980s, but 1990's "The Razors Edge" went 5x Platinum in the U.S., Canada, and Australia. After 2000's "Stiff Upper Lip," AC/ DC went on hiatus for several years, and 2008's "Black Ice, " was an instant success, debuting at #1 in nearly 30 countries. Malcolm left the band in 2014 due to health problems, and nephew Stevie Young took his place. By 2016, Brian Johnson and drummer Phil Rudd had also left AC/DC, so Angus recruited Axl Rose of Guns N' Roses to replace Johnson on the Rock or Bust World Tour's remaining dates. 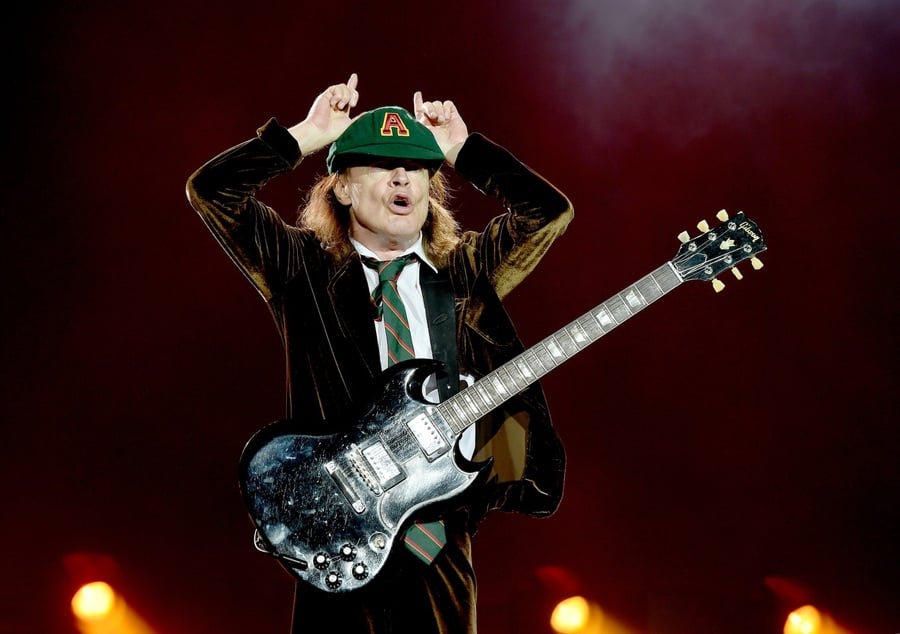 In 1979, Angus began a relationship with Ellen Van Lochem, and they married six months later. Young is a chain-smoker, but he has been a teetotaler his entire life. Guitarist Tommy Redd, who toured with AC/DC said that when the other band members were drinking alcohol, "Angus was always drinking a big glass of chocolate milk or coffee." In 2019, Young made a $19,260 donation to the Alzheimer Society of Ontario; Canadian hockey referee Steve McNeil was raising funds in honor of his mother as well as Angus' brother Malcolm (who passed away from dementia in 2017) by skating for 19+ hours in every NHL city in Canada. Young is a fan of Rangers FC, a Scottish football club.

In 2006, "Kerrang!" editor Paul Brannigan honored Young with the magazine's Legend Award, and a 2012 poll in "Australian Guitar Magazine" voted him "Best Australian Guitarist of All Time." With AC/DC, he won APRA Awards for Most Played Australian Work Overseas for "Big Gun" in 1995, "Highway to Hell" in 2009 and 2011, and "Rock 'n' Roll Train" in 2010, and Angus and Malcolm were named Songwriters of the Year in 2010. The band has also earned a Grammy, a Metal Storm Award, a Rock on Request Award, two UK Music Video Awards, four Classic Rock Roll of Honour Awards, and three ARIA Music Awards, and they were inducted into the ARIA Hall of Fame in 1988.

In 2007, Angus and Ellen designed a 3-story mansion in Ellen's hometown, a small Dutch town called Aalten. The multi-million-dollar home includes a recording studio, several guest rooms, and a huge backyard. The Youngs also own a home in the Kangaroo Point area of Sydney. 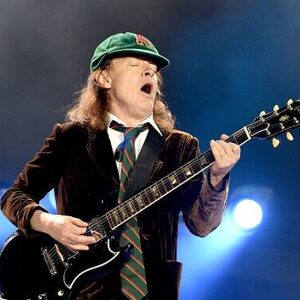