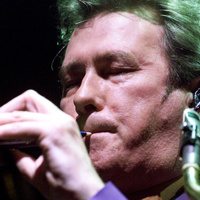 Andy Mackay net worth: Andy Mackay is an English musician who has a net worth of $30 million. Andy Mackay was born in Lostiwithiel, Cornwall, England in July 1946. He is best known for being a founding member of the art rock band Roxy Music as an oboe and saxophone player. Mackay has provided scores for television and also taught music. He is also a very noteworthy session musician. Andy Mackay has released the solo albums In Search of Eddie Riff in 1974, Resolving Contradictions in 1978, SAMAS Music for the Senses in 2004, London! New York! Paris! Rome! in 2009, and 3Psalms in 2018. Roxy Music formed in 1970 and released their self-titled debut studio album in 1972 which reached #10 in the UK. Their album For Your Pleasure was released in 1973 and reached #4 in the UK. Roxy Music released the album Stranded in 1973 which reached #1 in the UK as did their albums Flesh and Blood in 1980 and Avalon in 1982. Their albums Country Life in 1974, Siren in 1975, and Manifesto in 1979 all reached the Top 10 in the UK. Their single "Jealous Guy" reached #1 in the UK and Australia.