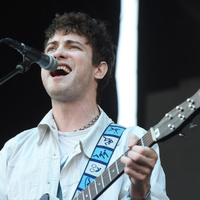 Andrew VanWyngarden net worth: Andrew VanWyngarden is an American musician who has a net worth of $14 million dollars. Born in Columbia, Missouri, Andrew VanWyngarden grew up in Memphis, Tennessee. He became interested in music as a child, and was part of a band called Accidental Mersh while in high school. The group was quite successful locally and released two albums. He went on to graduate from Wesleyan College, where he met fellow band member, Ben Goldwasser. He had originally intended to focus on a career in the sciences, but shifted his focus to music. He is the primary songwriter and lead vocalist for the alternative group, MGMT, which has received two Grammy nominations. The group has released two albums, and is currently working on the third. They signed with Columbia Records in 2006. In addition to his work with MGMT, he also performs in Blikk Fang, a duo with Of Montreal frontman, Kevin Barnes.