Alex James Net Worth: Alex James is an English musician, journalist and cheese maker who has a net worth of $25 million dollars. Alex James was born Steven Alexander James in Boscombe, Bournemouth, England on November 21, 1968. James is best known for playing bass in Blur as well as working with Fat Les, WigWam, and Bad Lieutenant.

He has been active in the entertainment industry since 1988. His primary instruments include bass, double bass, vocals, guitar, piano and keyboards. He is known for playing a Fender Precision Bass as well as an Ernie Ball Music Man StingRay. He attended Bournemouth School for Boys as well as Goldsmiths College where he met bandmate Graham Coxon. James created the band Fat Les with Keith Allen and Damien Hirst in 1998. The band released their first single, "Vindaloo," in correspondence with the FIFA World Cup. Along with music, James is also a writer for The Sun and maintains his own columns such as "Alex James on All Things Food," and "Mucking It. He is also a writer for Esquire magazine and has his own column on cheese. He also released an autobiography called Bit of a Blur, via Little, Brown & Company in 2007. James now specializes in artisan cheese making and owns a 200-acre farm in Kingham, Oxfordshire. He produces award-winning cheeses, including "Farleigh Wallop," which won the award for Best Goats' Cheese at the 2008 British Cheese Awards. He also produces everyday cheeses and sells them through Asda. Some flavors include "cheddar and tomato ketchup" and "cheddar and tikka masala. In 2011 James first opened up his farm to the public to host a food and music festival called "Alex James Presents Harvest. He received an Honorary Doctorate from Bournemouth University in 2010 and is currently married to Claire Neate with five children by the names of Geronimo, Artemis, Galileo, Sable, and Beatrix. 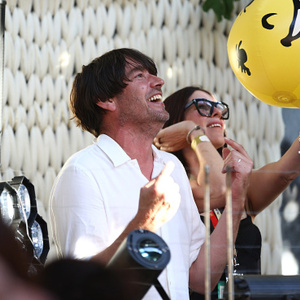