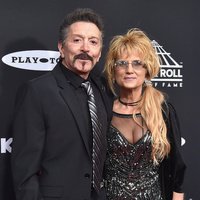 Alec John Such Net Worth

Alec John Such net worth: Alec John Such was an American musician who had a net worth of $10 million. Alec John Such was born in Yonkers, New York in November 1951. He died on June 5, 2022 at the age of 70. He was best known for being the former bass guitarist of the rock band Bon Jovi from 1983 to 1994. Such played on Bon Jovi's self-titled debut studio album in 1984 and their 1985 album 7800° Fahrenheit. He also played on the Bon Jovi albums Slippery When Wet in 1986 which reached #1 in the US, Australia, Canada, Finland, and Switzerland. Such played on the Bon Jovi album New Jersey in 1988 which reached #1 in six countries and on the album Keep the Faith in 1992 which reached #1 in two countries and the Top 10 in eight others. He played on the Bon Jovi singles "Runaway", "You Give Love a Bad Name", "Livin' on a Prayer", "Wanted Dead or Alive", "Bad Medicine", "I'll Be There for You", "Always", and more. After leaving the band Such managed the band 7th Heaven. He owns a motorcycle shop in New York City and joined Bon Jovi at Giants Stadium in 2001 before retiring from music.