Albert Hammond, Jr. Net Worth: Albert Hammond, Jr. is an American musician who has a net worth of $10 million dollars. Born in Los Angeles, California on April 9, 1980, Hammond is best known for playing guitar and singing in The Strokes. He has been active in the music industry since 1999 and has been affiliated with record labels such as Cult Records, New Line, Rough Trade, Scratchie, and Black Seal.

The band plays an arrangement of indie rock, garage rock, post-punk, and alternative rock. Hammond has claimed The Beach Boys, The Velvet Underground, Buddy Holly, and John Lennon as some of his biggest influences. He attended Insitut Le Rosey in Switzerland where he met future bandmate Juilan Casablancas at the age of thirteen. They formed The Strokes in 1998. Some of Hammond's no table instruments include a 1985 '70s reissue Olympic White Fender Stratocaster and a Gibson Les Paul, Jr. He is known for his three-piece suits and was propositioned to release his own line of suits to be featured at Confederacy store in Los Angeles. Hammond is currently married to Justyna Sroka and has released two solo studio albums as well as one EP. 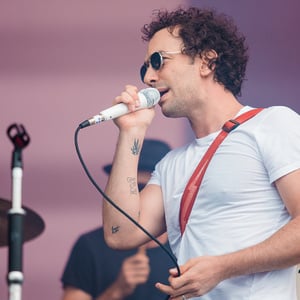