What is Alan Jackson's Net Worth?

Alan Jackson is an American country music artist who has a net worth of $150 million. Jackson has sold over 75 million records, making him one of the world's best-selling artists, and he has released 21 studio albums. More than 50 of Alan's singles have cracked the "Billboard" Hot Country Songs chart, and 35 of them hit #1, including "I'd Love You All Over Again," "Don't Rock the Jukebox," "Love's Got a Hold on You," "I Don't Even Know Your Name," "It Must Be Love," and "Where Were You (When the World Stopped Turning)."

A member of the Grand Ole Opry, Jackson's most commercially successful album was 1992's "A Lot About Livin' (And a Little 'bout Love)," which was certified 6× Platinum and topped the "Billboard" Top Country Albums chart. He has won dozens of awards for his music, including two Grammys – Best Country Song for "Where Were You (When the World Stopped Turning)" in 1992 and Best Country Collaboration with Vocals for "As She's Walking Away" (with the Zac Brown Band) in 2011. Alan's business ventures include the Alan Jackson Collection sold at Cracker Barrel and an endorsement deal with Ford.

Alan Jackson was born Alan Eugene Jackson on October 17, 1958, in Newnan, Georgia. He grew up with mother Ruth, father Joseph (better known as Gene), and four older sisters in a home that was built around his grandfather's toolshed. Alan primarily listened to gospel music during his youth until he was introduced to the music of Hank Williams Jr., Gene Watson, and John Anderson by a friend. Jackson attended Elm Street Elementary and Newnan High School, and after graduation, he joined a band called Dixie Steel. Alan started writing music in 1983, when he was in his mid-twenties, and at age 27, he moved to Nashville, Tennessee, to pursue a music career. In 1987, he recorded the album "New Traditional" in  Hendersonville, Tennessee, and it was reportedly only released in Japan.

After moving to Tennessee, Alan found a job in the mailroom of The Nashville Network. His wife, Denise, worked as a flight attendant, which resulted in her meeting Glen Campbell. Denise asked Campbell for advice for Alan, and Glen gave her his manager's business card and told her that Alan should call. Jackson was signed to Arista Records, and when the label formed an Arista Nashville branch in 1989, Alan was the first artist signed to it. His debut single, "Blue Blooded Woman," was released that year, followed by his first studio album, "Here in the Real World," on February 27, 1990. The album went Double Platinum, reached #4 on the "Billboard" Top Country Albums chart, and included the hit singles "Here in the Real World," "Wanted," "Chasin' That Neon Rainbow," and "I'd Love You All Over Again." Jackson also co-wrote many of the songs on the 1991 Randy Travis album "High Lonesome." Alan followed his successful debut with the 4× Platinum "Don't Rock the Jukebox" (1991), 6× Platinum "A Lot About Livin' (And a Little 'bout Love)" (1992), 4× Platinum "Who I Am" (1994), and 3× Platinum "Everything I Love" (1996). 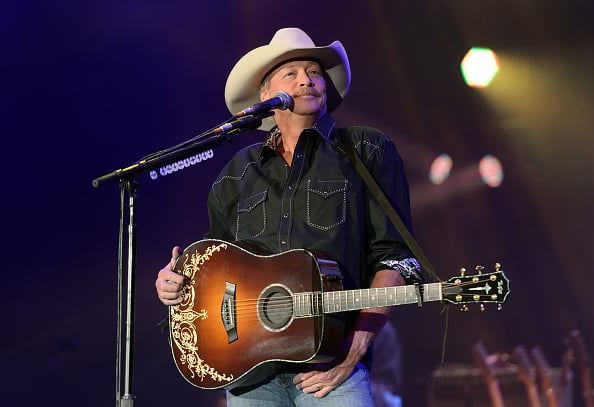 Between 2000 and 2008, Jackson released five studio albums, "When Somebody Loves You" (2000), "Drive" (2002), "What I Do" (2004), "Like Red on a Rose" (2006), and "Good Time" (2008), and they all reached #1 on the "Billboard" Top Country Albums chart. He had nine #1 singles that decade, including "Where I Come From," "It's Five O'Clock Somewhere" (with Jimmy Buffett), and "Country Boy." In 2001, Alan released the single "Where Were You (When the World Stopped Turning)" in tribute to the victims of the 9/11 terrorist attacks, and it earned him his first Grammy. The following decade, Jackson released the albums "Freight Train" (2010), "Thirty Miles West" (2012), "The Bluegrass Album" (2013), and "Angels and Alcohol" (2015), with "Thirty Miles West" and "Angels and Alcohol" reaching #1 on the Top Country Albums chart. In 2011, Alan left Arista Nashville and signed with EMI Records Nashville. In 2014, the Country Music Hall of Fame opened the "Alan Jackson: 25 Years of Keepin' It Country" exhibit and named Jackson its Artist-in-Residence for that year. In 2016, Alan and 29 other artists performed on the track "Forever Country," a mash-up of "I Will Always Love You," "On the Road Again," and "Take Me Home, Country Roads," in celebration of the CMA Awards" fiftieth anniversary. In May 2021, Jackson released his 21st studio album, "Where Have You Gone," which reached #2 on the Top Country Albums chart.

Alan married Denise Jackson, his high school sweetheart, on December 15, 1979, and they welcomed daughter Mattie on June 19, 1990, followed by Alexandra on August 23, 1993, and Dani on August 28, 1997. The couple separated for a few months in 1998 as a result of Alan's infidelity and the pressures of his career, and Jackson has written about Denise in several of his songs, such as "Remember When" and "She Likes It Too." Denise published the "New York Times" bestseller "It's All About Him: Finding the Love of My Life" in 2007. Alan was close friends with country singer George Jones and mentioned him in the songs "Murder on Music Row" and "Don't Rock the Jukebox." Jones appeared  in the videos for "Don't Rock the Jukebox" and "Good Time," and he made a surprise appearance at Alan's 2008 "CMT Giants" ceremony. After George passed away in 2013, Jackson performed Jones' song "He Stopped Loving Her Today" during the funeral service at the Grand Ole Opry. Alan has an impressive collection of classic cars, including a 1970 Chevelle SS 396 and a 1968 Shelby GT 500 KR Convertible. 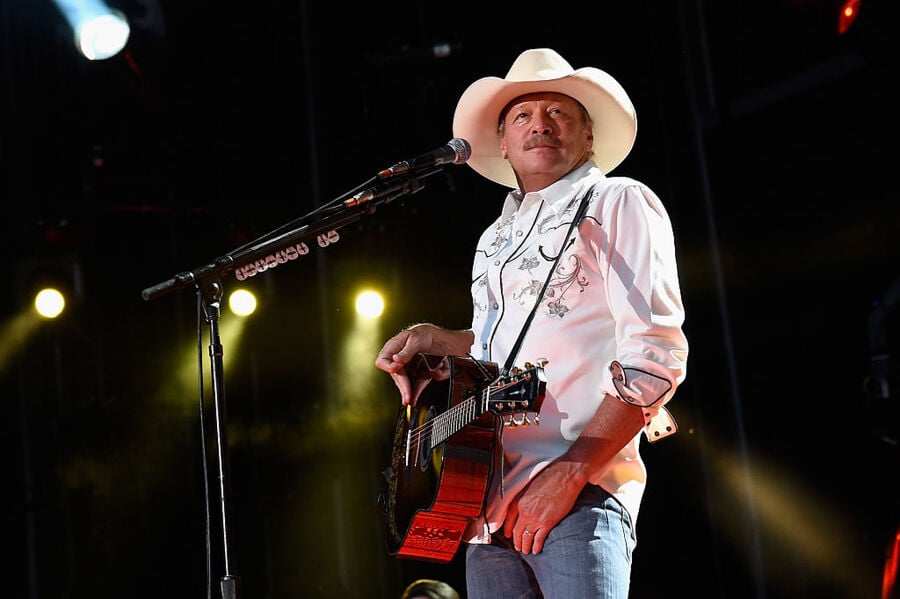 According to Jackson's official website, he has won (to name a few) two Grammys, 19 Academy of Country Music Awards, 16 Country Music Association Awards, two American Music Awards, three "Billboard" Music Awards, five Nashville Songwriters Association International Songwriter/Artist of the Year Awards, two Christian Country Music Association Awards, and a Blockbuster Entertainment Award. Alan has been inducted into the Georgia Music Hall of Fame (2001), Country Music Hall of Fame (2017), and Nashville Songwriters Hall of Fame (2018), and he has received numerous awards from the American Society of Composers, Authors and Publishers (ASCAP), including seven Songwriter/Artist of the Year Awards, two Song of the Year Awards, 46 Country Song Awards, a Golden Note Award, and a Founders Award. He also earned the ASCAP Heritage Award for being the "most performed country music songwriter-artist of ASCAP's first 100 years." Jackson received a star on the Hollywood Walk of Fame in 2010, and he was inducted into the Music City Walk Of Fame in 2011. In 2004, part of Interstate 85 in Newnan, Georgia, was renamed the Alan Jackson Highway.

In September 2020, Alan listed his home in Franklin, Tennessee, for sale for $23 million. The 22,000 square-foot main house has five bedrooms and eight bathrooms. The main house sits on four acres, and it is surrounded by 120 acres of remote and private greenery.

Alan and his wife bought this property undeveloped in the mid-1990s and spent years custom building the mansion and grounds. This property sold for $19 million in March 2021.

In June 2009 Alan listed a previous mansion for sale for $38 million. He ultimately accepted $28 million a year later. 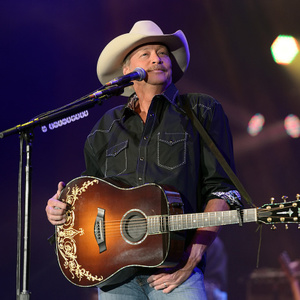