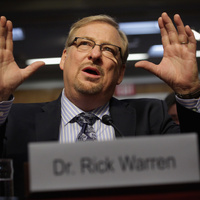 Rick Warren Net Worth: Rick Warren is an American author and evangelical Christian pastor who has a net worth of $25 million dollars. Rick Warren was born in San Jose, California, in 1954, to a Baptist minister father and librarian mother. He founded his high school's first Christian club and earned several degrees. Warren holds a B.A. from California Baptist University, a Master of Divinity from Southwestern Baptist Theological Seminary, and a Doctor of Ministry from California's Fuller Theological Seminary. He first learned he was meant to be a pastor when he was 19 years old and in college. He founded Saddleback Church in Lake Forest, California; it is now the country's eighth-largest church. Warren is the author of a handful of books, including "The Purpose Driven Church" and "The Purpose Driven Life". He's known for his outspoken religious views and does not believe in evolution. Warren backed California Proposition 8, which sought to define marriage as a union between a man and woman, leading to his church being targeted by opponents of the proposed legislation. Warren believes in a five-point plan to bring global harmony to Earth; he calls it his "P.E.A.C.E. Plan". It calls for planting churches, equipping servant leaders, assisting the poor, caring for the sick, and education. Saddleback Church and Warren attracted national attention when they hosted Barack Obama and John McCain for the Civil Forum on The Presidency in 2008. Later, Obama asked the pastor to speak at his inauguration. Warren married his wife, Kay, in 1979, and had three children; their youngest son committed suicide in 2013. He and his wife aim to live on ten percent of their income and donate the rest to charity.