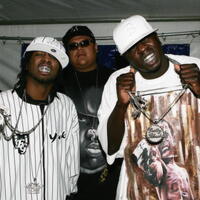 Yukmouth Net Worth: Yukmouth is an American rapper who has a net worth of $1 million dollars. Born Jerold Dwight Ellis III on October 18, 1974 in Oakland, California, he is the founder of The Regime (an American hip-hop collective group), Smoke-A-Lot Records (a record label) and Godzilla Entertainment (a record label) and a member of Thug Lordz (a collaborative group with rapper C-Bo). Yukmouth is also a member of the rap duo Luniz (along with Numskull). He released a solo album with J-Prince's Rap-a-lot Records, as well as three follow-up albums. His album Thugged Out: The Albulation went gold. With the advent of his 1997 Lunitik Musik, Yukmouth, he rechristened himself 'Smoke-A-Lot', but went back to his former name of Yukmouth when he made his solo debut.