Yelawolf net worth and salary: Yelawolf is an American hip hop recording artist who has a net worth of $4.5 million. Born Michael Wayne Atha, Yelawolf earned his wealth through rapping contracts with Columbia and Eminem's Shady Records, to which he is currently signed.

Yelawolf was born Michael Wayne Atha in Gadsden, Alabama in December 1979. In 2005 he appeared on UPN's The Road to Stardom with Missy Elliott as an artist. After the show was over he released his first mixtape and then his independent debut album titled Creek Water. He later signed with Columbia Records but was dropped. He released two more mixtapes and signed with Ghet-O-Vision Entertainment and released an EP. His 2010 mixtape Trunk Muzik created an online buzz. He signed with Interscope Records and released Trunk Muzik 0-60 in 2010. He signed with Eminem's Shady Records in 2011. He has released two studio albums with his latest being 2014's Love Story. He has also released two EPs and six mixtapes. Yelawolf started his own record label called Slumerican. His album Radioactive debuted at #27 on the Billboard 200 chart. At one point he was homeless in California. He became engaged to Fefe Dobson in July 2013. He has worked with Eminem, Ed Sheeran, and Travis Barker. 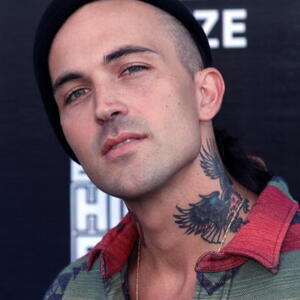