Watkin Tudor Jones net worth: Watkin Tudor Jones is a South African rapper, record producer, and actor who has a net worth of $10 million. Watkin Tudor Jones was born in Johannesburg, South Africa in September 1974. He is best known for being the front man of the rap rave group Die Antwoord under his stage name Ninja. The group released their debut studio album $O$ in 2009 and had more success with their second album Ten$ion in 2012. Their third album Donker Mag in 2014 and fourth album Mount Ninji and da Nice Time Kid in 2016 both had lot of success and reached #1 on the US Dance charts. Jones has released the solo albums Memoirs of a Clone and The Fantastic Kill. He has also released albums with The Original Evergreen, Max Normal, The Constructus Corporation, The Man Who Never Came Back, Fucknrad, and MaxNormal.TV. As an actor he starred as Ninja in the 2015 film Chappie. 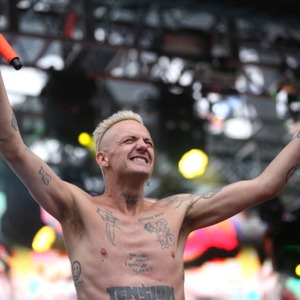