Uncle Murda Net Worth: Uncle Murda is an American rapper who has a net worth of $500 thousand dollars. Born on July 25, 1980 and spending most of his time in the Pink House Projects in East New York and Brooklyn, Murda's birth name is Leonard Grant, and he is best known for signing to Def Jam and Roc-A-Fella Records.

He has been active in the music industry since 1999 and was discovered by Jay-Z in 2007. Murda split from both labels in 2008. He survived a gunshot to the head that year. Murda announced in 2011 that he would be joining the Urban Wrestling Federation. In 2012 he changed his name to U.M. and signed to Epic Records. He has released one album and eight mixtapes and has made over 25 guest appearances. 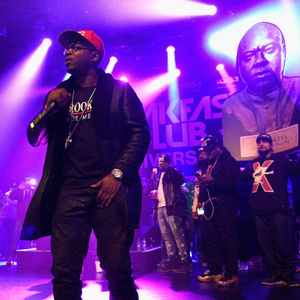