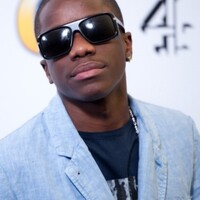 Tinchy Stryder Net Worth: Tinchy Stryder is a Ghanaian-born British musician and businessman who has a net worth of $4 million dollars. Born Kwasi Danquah III on September 14, 1986 in Accra, Greater Accra, Ghana, he is the co-founder and co-chief executive officer (CEO) of Takeover Roc Nation, a global independent record label and entertainment company. Stryder has released three solo albums: Star in the Hood, Catch 22 and Third Strike. His projects aside from music include the clothing line Star in the Hood as well as serving as the president and chief executive of Takeover/Cloud 9 (music publishing company through EMI Music Publishing). Stryder co-owns Takeover Roc Nation with fellow musician Jay-Z. Stryder announced in 2010 that he would become a footballer and in 2011 he was hired by Honda's motorbike division to help with their pan-European campaign to push the division's Vision 50. His philanthropic efforts include attending the 02 Shepherds Bush Empire in England (2010) for Alicia Keys' charity Keep a Child Alive charity ball and auction. In 2012, he launched Goji Electronics, which produces a line of headphones, computer, smartphone and audio products and donates a portion of its income to charity.