Timati Net Worth: Timati is a Russian rapper, singer-songwriter, record producer, actor, and entrepreneur who has a net worth of $20 million. Timati was born in Moscow, Soviet Union in August 1983. He studied violin at a music school at the request of his grandfather. Timati became associated with the YPS Squad. Timati was featured in the music reality show Star Factory 4 in 2004. He was part of the group Banda and co-founded VIP 77. Timati owned the B-Club nightclub as well as the Black October bar and the E-Life store. He is the CEO of his record label Black Star Inc. Timati's debut studio album Black Star was released in 2006. His second studio album The Boss was released in 2009. The album featured the singles "Groove On" (with Snoop Dogg) and "Welcome to St. Tropez". In 2011 a remix of "Welcome to St. Tropez" which featured DJ Antoine and Kalenna became his biggest hit to date. The single made the top 10 in Austria, Belgium, France, Germany, Netherlands, and Switzerland. Timati's album SWAGG was released in 2012 and contained. the singles "I'm on You" which featured P. Diddy, Dirty Money, and DJ Antoine, and "Not All About The Money" which featured La La Land, Timbaland, and Grooya. Timati's latest album 13 was released in 2013. He has also collaborated with artists such as Busta Rhymes, Timbaland, Flo Rida, Fat Joe, Xzibit, and Eve. 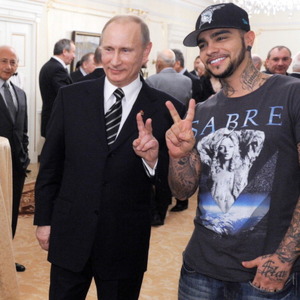