Taz Arnold Net Worth: Taz Arnold is an American hip hop artist, music producer, and designer who has a net worth of $400 thousand dollars. Taz Arnold is part of the alternative hip hop group The Sa-Ra Creative Partners (Sa-Ra) with Om'Mas Keith and Shafiq Husayn. The group's debut studio album The Hollywood Recordings was released in 2007. Their second studio album Nuclear Evolution: The Age of Love was released in 2009. They have worked with artists such as Jurassic 5, Pharoahe Monch, Heavy D, Dr. Dre, Jill Scott, Erykah Badu, Jay-Z, John Legend, and Talib Kwele. The group was signed to Kanye West's GOOD Music label. He is now part of a new collective known as TI$A. TI$A sells graphic tees, hoodies, and baseball hats. As a child Taz was part of a prep gang known as The Nerds Gang. He is known for his style and works as a designer for MCM. He was noted for appearing in a pair of leopard skin tights and being part of Kanye West's crew at Paris Fashion Week. 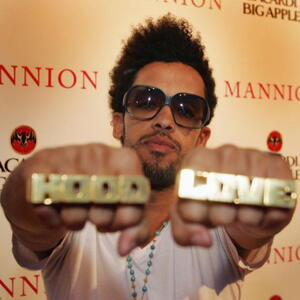