What was Takeoff's net worth?

Takeoff was an American rapper who had a net worth of $26 million at the time of his death. Tragically, Takeoff was murdered on November 1, 2022 at the age of 28. Takeoff was best known for being a member of the member of the hip hop trio Migos. The other two members, Quavo and Offset, are his uncle and cousin, respectively. Among the group's hit songs are "Versace," "Bad and Boujee," "MotorSport," and "Stir Fry."

Takeoff was born as Kirshnik Khari Ball on June 18, 1994 in Lawrenceville, Georgia, a town near Atlanta. Along with relatives Quavious Keyate Marshall and Kiari Kendrell Cephus, he was brought up by his mother. The boys grew up listening to such artists as Gucci Mane, Outkast, and Lil Wayne, drawing influence from their rap stylings.

In 2008, Takeoff formed the band Migos with his uncle Quavious, known professionally as Quavo, and his cousin Kiari, known as Offset. Initially, they called themselves the Polo Club. The group released its first full-length project, a mixtape entitled "Juug Season," in 2011, and subsequently released another mixtape, "No Label," in 2012.

Migos truly rose to prominence in 2013, when the group released its single "Versace." Remixed by Canadian rapper Drake, it peaked at number 99 on the Billboard Hot 100, and hit number 31 on the Hot R&B/Hip-Hop Songs chart. The single was then featured on Migos' mixtape "Y.R.N." The group subsequently released "No Label 2," a sequel to its second mixtape that was downloaded over 100,000 times during its first week of release. More success came in 2014 with the single "Fright Night," which peaked at number 69 on the Billboard Hot 100.

In 2015, Migos released its debut studio album, "Yung Rich Nation." Featuring guest appearances from Young Thug and Chris Brown, the album came in at number three on the Top Rap Albums chart, and also spawned the hit single "One Time." It ultimately peaked at number 17 on the Billboard 200. Migos released a new mixtape in September of 2015 called "Back to the Bando." Its first song, "Look at My Dab," achieved global recognition when it popularized the dance move "dabbing" in many parts of the world. Also in 2015, Migos partnered with Rich the Kid for the album "Streets on Lock 4."

Migos had its first number-one hit with 2016's "Bad and Boujee," featuring Lil Uzi Vert; it was the first single from the group's second album, "Culture." The song went on to become certified four times platinum by the RIAA. However, Takeoff was not featured nor credited on the track, on account of him having been busy during its recording. "Culture" was ultimately released in January of 2017, debuting at number one on the Billboard 200 and moving around 131,000 album-equivalent units in its first week. That July, it went platinum.

Toward the end of 2017, Migos released "MotorSport," the lead single from its third studio album, "Culture II." Featuring Trinidadian-American rappers Nicki Minaj and Cardi B, the song hit number six on the Billboard Hot 100. A second single, "Stir Fry," peaked at number eight. "Culture II" was released to great success in January of 2018, becoming Migos' second album to debut at number one on the Billboard 200, moving 199,000 album-equivalent units in its first week of release. The album "Culture III" was slated to be released in 2020, but was delayed due to the COVID pandemic. 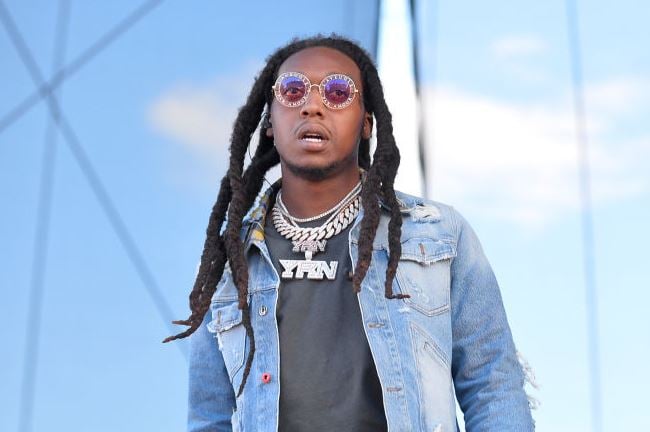 In April of 2015, Migos was set to headline Georgia Southern University's spring concert. However, the group ran into trouble early, taking to the stage almost an hour-and-a-half later than the scheduled set time. Moreover, Migos performed for less than 30 minutes, violating the contract's stipulation of a 45-minute set length. When the scent of marijuana was detected coming from the group's vehicles, law enforcement went in to investigate and they ended up arresting the trio and 12 members of the entourage on account of controlled substance possession, as well as possession of firearms within a school safety zone and possession of firearms by convicted felons, the latter charge due to Offset's prior criminal record and incarceration.

Two days after the incident, Takeoff, Quavo, and six members of their entourage were released on bond. Offset and the six others remained in custody without bond.

In July of 2017, Takeoff ran into more trouble prior to takeoff on a flight from Atlanta to Des Moines, Iowa. After he allegedly refused to move his bag from the floor to the overhead storage, he was asked to be removed from the plane.

Further controversy came in 2020, when Takeoff was named as the perpetrator in a civil lawsuit that charged him with sexual battery, assault, false imprisonment, and more. The lawsuit was filed by a female victim, who cited Takeoff for these abuses at a house party in Los Angeles. In 2021, the Los Angeles District Attorney's office announced that it would not be filing any criminal charges against Takeoff due to inadequate supporting evidence.

In the early morning hours of November 1, 2022 Takeoff was shot while attending a private party in Houston. He was 28 years old.