How much is Snoop Lion Worth?

Snoop Lion net worth: Snoop Lion is an American rap artist, singer-songwriter, and actor who has a net worth of $135 million dollars. Snoop Lion, also known as Calvin Cordozar Broadus, Jr., and formerly known as Snoop Dogg, was born in Long Beach, California. He grew up singing in his local church and began rapping when he was in middle school. He started a group with some friends during high school, and one of his freestyles found its way to Dr. Dre. He was subsequently invited to audition, and began working with Dr. Dre on Dr. Dre's own album, "The Chronic". He released his debut album, "Doggystyle" in 1993, and it was a smash hit. In 1996, he was acquitted of murder charges, and moved into a lavish compound in Claremont, California with his wife and their 20 pit bulls. He also launched his own record label, Doggy Style Records, Inc. After releasing his follow-up album, "The Doggfather" in 1996, he began to shift his sound to a more relaxed vibe. He also changed record labels. Since then, he has released more than 10 albums. He has also appeared in multiple films, including "Training Day", "Old School", and "Scary Movie 5". Snoop has sold more than 35 million albums worldwide with 23 million in the U.S. He has also released the albums Da Game Is to Be Sold, Not to Be Told in 1998, No Limit Top Dogg in 1999, Tha Last Meal in 2000, Paid tha Cost to Be da Boss in 2002, R&G (Rhythm & Gangsta): The Masterpiece in 2004, Tha Blue Carpet Treatment in 2006, Ego Trippin' in 2008, Malice n Wonderland in 2009, Doggumentary in 2011, Reincarnated in 2013, Bush in 2015, Coolaid in 2016, and Neva Left in 2017. He has had many popular singles including "What's My Name?", "Gin and Juice", "Beautiful" (featuring Pharrell and Charlie Wilson), "Drop It Like It's Hot" (featuring Pharrell), "Wet", "Young, Wild & Free" (featuring Wiz Khalifa and Bruno Mars), and many more. 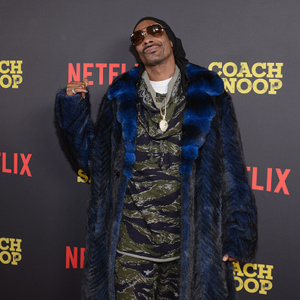