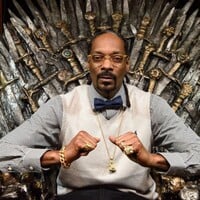 What is Snoop Dogg's net worth?

Snoop Dogg is a West Coast-based rapper, singer, songwriter, producer, media personality, entrepreneur, and actor. As of this writing, Snoop Dogg has a net worth of $150 million. His music career began in 1992 when he was discovered by Dr. Dre. He went on to release a number of classic songs and albums under the Death Row Records label. Snoop Dogg is one of the wealthiest and most successful rappers to come out of the 1990s rap scene, and one of the few still recording today.

Cordozar Calvin Broadus was born on October 20, 1971, in Long Beach, California. His parents Vernall and Beverly split three months after Snoop was born. His father was largely absent from his life. His mother remarried.  His mom and stepfather nicknamed him Snoopy due to how much he loved the cartoon character from Peanuts. He was the second of his mother's three sons. When he was very young, Snoop began singing and playing piano at the Golgotha Trinity Baptist Church. In sixth grade, he began rapping.  As a child, Calvin sold candy, delivered newspapers, and bagged groceries to help his family make ends meet. Despite his mother's best efforts to keep him singing in the choir and playing football, rather than gang banging and running the streets, he began the latter activity in his teenage years. He was a member of the Rollin' 20s Crips gang from the Eastside area of Long Beach. He was arrested for possession of cocaine not long after graduating from high school. For the next three years, was frequently in and out of jail or prison.

Snoop and his cousins Nate Dogg and Lil' 1/2 Dead and friend Warren G recorded homemade tapes. They called themselves 213 after the area code of Long Beach at that time. "Hold On," one of Snoop's early solo freestyle songs was on a mixtape that wound up in Dr. Dre's hands. He was so impressed that he invited Snoop to audition and introduced him to NWA affiliate The D.O.C., who taught him how to structure his lyrics and built verses, hooks, and choruses. 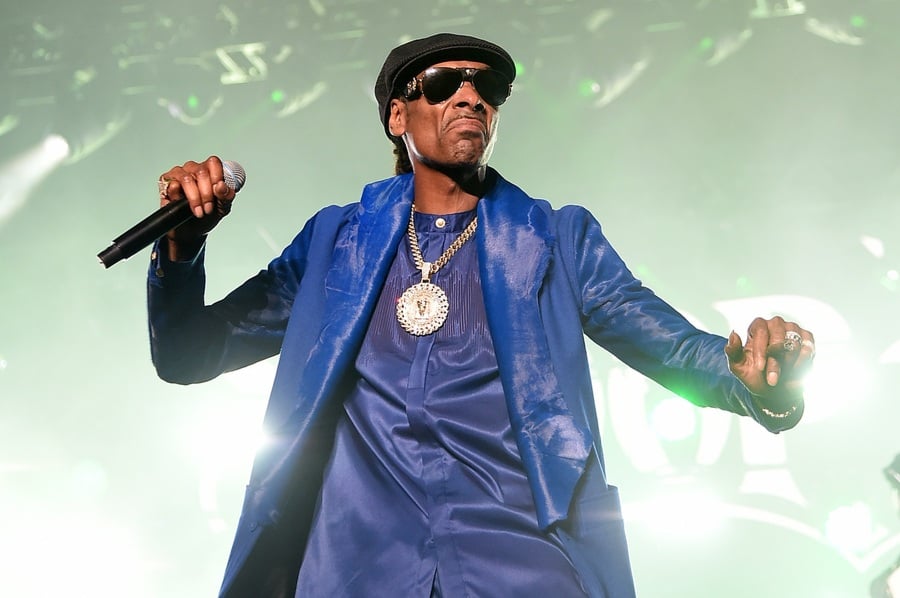 Snoop's debut album, Doggystyle, was produced by Dr. Dre and released in 1993 by Death Row Records. The album debuted at number one on both the Billboard 200 and Billboard Top R&B/Hip-Hop Albums charts. The album produced several hit singles including "What's My Name?" and "Gin & Juice." Snoop's next album, Doggfather, was released in 1996 and also debuted at number one on both Billboard charts. For his next three albums, Snoop left Death Row and signed with No Limit Records. He released 1998's Da Game Is to Be Sold, Not to Be Told, 1999's No Limit Top Dogg, and 2000's Tha Last Meal. After that, he signed with Priority/Capitol/EMI Records in 2002 and released Paid tha Cost to Be da Boss. He signed with Geffen Records in 2004 and released R&G (Rhythm & Gangsta: The Masterpiece, That Blue Carpet Treatment, Ego Trippin, Malice 'n Wonderland, and Doggumentary.

He also coaches a youth football league and high school football team. In September 2009 Snoop was hired by EMI as the chairman of  Priority Records.

In 2012, after a trip to Jamaica, Snoop announced that he had converted to Rastafarianism and was to be known as Snoop Lion. He released a reggae album, Reincarnated as well as a documentary of the same name about his experience in Jamaica.

In 2015, he went back to being called Snoop Dogg, and released Bush. In 2018, Snoop announced that he was a born-again Christian and released his first gospel album, Bible of Love. He released his seventeenth solo album, I Wanna Thank Me in 2019.

In addition to his music, Snoop has directed several adult films under pseudonyms (Michael J. Corleone and Snoop Scorcese) and has appeared on television and in films, both as himself and in fictional roles. Snoop Dogg has hosted a number of television shows, including Doggy Fizzle Televizzle, Snoop Dogg's Father Hood, Dogg After Dark, WrestleMania, and Snoop and Martha's Potluck Dinner Party. Snoop also has a number of commercial endorsements, including Boost Mobile, Chrysler 200, Orbit Gum, and St. Ides; he also lends his name to a malt liquor of his own, Snoop Dogg's footlong hot dogs, the Snoop Dogg Board Company, and a number of clothing lines. 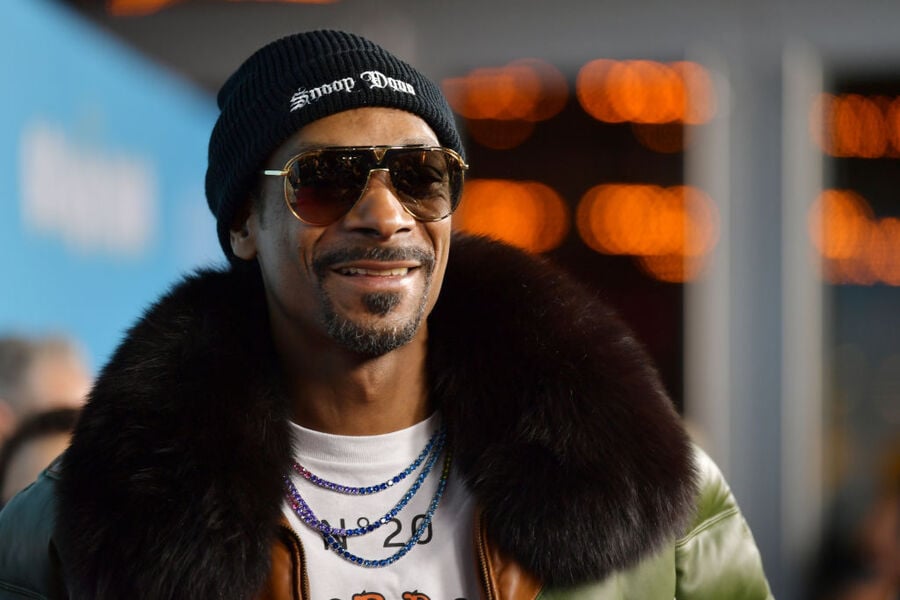 On June 12, 1997, Snoop married his high school sweetheart, Shante Taylor. In May 2004, they filed for divorce. They reunited and renewed their wedding vows in January 2008. They have three children together, sons Corde (1994) and Cordell (1997), and daughter Cori (1999). Snoop also has a son, Julian Corrie Broadus (1998), from a relationship with Laurie Holmond. Snoop became a grandfather in 2015 when Corde had a son with his girlfriend, Jessica Kyzer.

Snoop has been a cannabis smoker since the start of his career and has made it a trademark of his image.

In a 2006 interview, Snoop claimed that he was a professional pimp in 2003 and 2004, saying, "That shit was my natural calling and once I got involved with it, it became fun. It was like shootin' layups for me. I was makin' 'em every time." He went on to say that on the advice of some of the pimps he knew, he eventually gave up pimping to spend more time with his family.

Dogg partners with city officials and annually gives away turkeys to the less fortunate in Inglewood, California at Thanksgiving. He gave away 3000 turkeys in 2016. 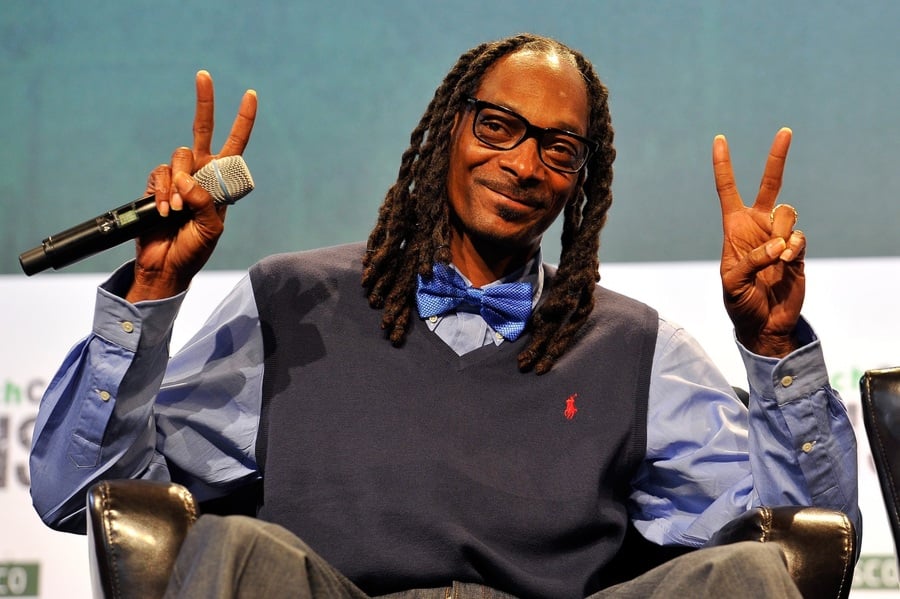