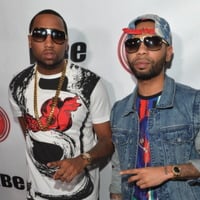 Slow Bucks net worth: Slow Bucks are a pair of American entrepreneurs and entertainment executives who have a net worth of $500 thousand dollars. Slow Bucks is made up of Windsor "Slow" Lubin and Rodney "Bucks" Charlemagne. The pair run Slowbucks, an entertainment company that includes their clothing line, Slowbucks, as well as their online social networking platform for musicians called, Slowbucks.tv. Slowbucks.tv caters to up and coming music artists, and many of the artists have started wearing the Slowbucks clothing line as a way to gain national recognition. The pair is currently embroiled in a legal battle that came about after Slow's chain was stolen while he was appearing at Hot 97's Summer Jam. He believes the chain snatching was orchestrated by 50 Cent in retaliation for an Instagram photo Slowbuck posted of 50 Cent's son. Slow has spoken on various radio stations and held a press conference regarding the on-stage incident, and 50 Cent is currently being investigated.