Slim Thug net worth: Slim Thug is an American rapper who has a net worth of $2 million dollars. Slim Thug was born Stayve Jerome Thomas in Houston, Texas in September 1980. He was given his nickname as a teenager for being tall and lanky and is now 6'6″ tall. When he was 17 he started to perform freestyle raps at parties. In the late 1990s he started his career with Swishahouse records. He left the label and started his own called Boss Hogg Outlawz. Thug has also bought two record stores and worked in real estate. His debut studio album Already Platinum was released in 2005. The album did not make it to Platinum but was certified Gold. It reached #1 on the U.S. Rap, and #1 on the Billboard Hot 100 and US R&B charts. Thug has released a total of four studio albums. He is best known for his contribution to Mike Jones's single "Still Tippin'". Thug's most popular singles have been "I Ain't Heard of That" and "So High". In 2006 he won an MTV Video Music Award. Thug has worked with artists such as Pharrell, T.I., B.o.B, Gwen Stefani, and Beyonce. 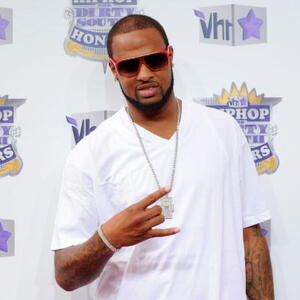