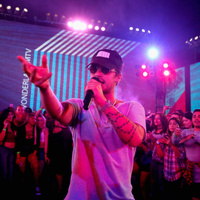 Russ net worth: Russ is an American rapper, singer, songwriter, and record producer who has a net worth of $10 million. Russ was born in Secaucus, New Jersey in September 1992.  He is a member of the Diemon Crew rap group. Russ released his debut studio album There's Really a Wolf in 2017 and the album reached #7 on the Billboard 200, #4 on the US Rap and US R&B/Hip-Hop charts, and #9 in Canada. His second album Zoo was released in 2018 and reached #4 on the Billboard Hot 100 and #2 on the US Rap and US R&B/Hip-Hop charts. He had success with the single "What They Want" which was certified 2x Platinum and his single "Losin Control" was also 2x Platinum and reached the Top 10 on the US R&B and US Rhythmic charts. Russ has appeared on the Diemon albums Velvet, Apollo 13, 5280, Vacation, Straight From Limbo, The Edge, Color Blind, Pink Elephant, Brain Dead, Silence, and How to Rob. Between September 2017 and September 2018, Russ earned $15 million, making him one of the highest paid people in hip-hop.