Roscoe Dash New Worth: Roscoe Dash is an American rapper and singer who has a net worth of $4 million dollars. Born Jeffery Johnson, Jr. on April 2, 1990 in Atlanta, Georgia, Roscoe Dash was introduced to the world of hip-hop at the age of twelve by his older brother and the two formed a rap group who went by the name of Black Out Boiz aka B.O.B., where Johnson (later known as Roscoe Dash) began using the stage name ATL (slang for Atlanta-as in Atlanta, Georgia).

ATL also became known for his unique use of the Mohawk hairstyle, which soon became his signature during that time. It was when Johnson met local entrepreneur LA da Boomman in 2009, who then signed Johnson to his production company Making Moves Inc (MMI), that Johnson's career got wings. During the time just before meeting Boomman, Johnson met a local rap group called Travis Porter through his cousin. Johnson (then known as ATL) decided he needed a more marketable name-and Roscoe Dash was born. He soon released a song called All the Way Turnt Up, featuring Travis Porter and Travis Porter released the same song on their mixtape entitled I'm a Differenter 2. Dash was only credited as a featured artist on the Travis Porter mixtape and was later told that it was simply an error that Dash was not credited for writing it. The song became popular, but most people associated it as being Travis Porter's song. Dash continues to defend his feeling that he should be given credit for the song and even re-released the song (featuring fellow Atlanta rapper Soulja Boy Tell 'Em) shortly after the Travis Porter debacle. 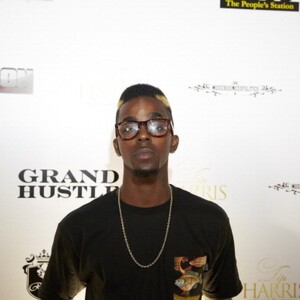