What is Roddy Ricch's net worth?

Roddy Ricch is an American rapper, singer, songwriter, and record producer who has a net worth of $20 million. Roddy Ricch is a rapper who first achieved widespread fame in 2018 with his single "Die Young." He had further success in 2019 when he was featured on Nipsey Hussle's single "Racks in the Middle," for which he received a Grammy Award for Best Rap Performance. The same year, Ricch released his debut studio album, "Please Excuse Me for Being Antisocial," which made it to number one on the Billboard 200 and spawned the hit single "The Box."

Roddy Ricch was born as Rodrick Wayne Moore Jr. on October 22, 1998 in Compton, California. He went to Carson Senior High School and Westchester Enriched Sciences Magnets, and spent some time living in Atlanta, Georgia. Ricch started rapping early on, and was making beats at the age of 16. He also was involved with the Park Village Compton Crips, resulting in a brief stint in county jail.

Ricch released his debut music project, the mixtape "Feed Tha Streets," in November of 2017. The next year, he released an EP called "Be 4 Tha Fame," and achieved mainstream recognition with his single "Die Young," which he wrote in honor of a childhood friend who was killed in a high-speed car chase. While in county jail in November of 2018, Ricch released his second mixtape, "Feed Tha Streets II"; it reached number 67 on the Billboard 200 and number 36 on the Top R&B/Hip-Hop Albums chart.

"Please Excuse Me for Being Antisocial"

In late 2019, Ricch released his debut studio album, "Please Excuse Me for Being Antisocial," which was supported by the singles "Big Stepper," "Start wit Me," and "Tip Toe." An immediate smash, the album debuted at number one on the Billboard 200, and became the longest-running number-one debut rap album in the country in 16 years. Moreover, its highest-charting single, "The Box," topped the Billboard Hot 100 for 11 weeks. "Please Excuse Me for Being Antisocial" went on to win Album of the Year at the BET Awards, while Ricch had six nominations at the Grammy Awards.

Ricch has had many successful collaborations with other rappers and artists during his young career. In 2018, he was featured on Meek Mill's album "Championships," and partnered with Marshmello on the single "Project Dreams." He had one of his biggest hits in 2019 as a featured artist on Nipsey Hussle's "Racks in the Middle," which won Ricch a Grammy Award for Best Rap Performance. Shortly after this, he was featured on the remix of Post Malone's "Wow," and partnered with Mustard on the hit single "Ballin'."

In 2020, Ricch appeared on such songs as "Letter to Nipsey," by Meek Mill; "Numbers," by A Boogie wit da Hoodie; and "Walk Em Down" by NLE Choppa. His greatest hit that year was "Rockstar" by DaBaby, which spent seven weeks at number one on the Billboard Hot 100. Ricch was subsequently featured on Pop Smoke's posthumous single "The Woo" and Cordae's single "Gifted."

Roddy has claimed to have earned $20 million in 2020 alone and has invested much of that into commercial real estate projects in his native Compton. 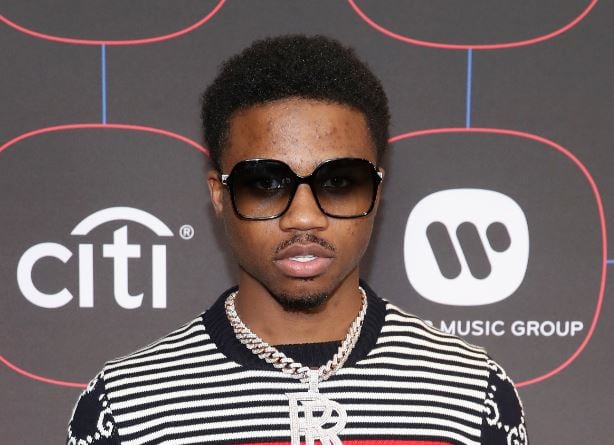 At a music video shoot in Atlanta, Georgia in February of 2021, Ricch and rapper 42 Dugg were victims in a shooting incident that left three people injured. The perpetrator was rapper OMB Peezy, who was later charged with aggravated assault with a deadly weapon and possession of a firearm during the commission of a crime. Ricch and 42 Dugg were unharmed, and the three injured all survived. Following this incident, Ricch and 42 Dugg released the single "4 Da Gang." A couple months later, Ricch released his single "Late at Night," which debuted at number 20 on the Billboard Hot 100.

In September of 2021, Ricch previewed his upcoming sophomore album, entitled "Live Life Fast." Later, on the first day of December, he announced the album would be released on the 17th of the month.

Ricch has been noted for his unique rapping style, which combines West Coast hip hop with drill rap. He has also been recognized for his raspy vocals. Ricch has cited a number of influences on his work, including Speaker Knockerz, Kendrick Lamar, Young Thug, Gucci Mane, and Future.

With model and businesswoman Allie Minati, Ricch had a son in 2020. The year before, he was arrested for felony domestic violence for allegedly assaulting his girlfriend at his home in Los Angeles. Ricch was ultimately released on a $50,000 bond, and all charges were dropped due to inadequate evidence.