How much is Questlove Worth?

Questlove net worth: Questlove is an American drummer, DJ, music journalist and record producer who has a net worth of $16 million dollars. Born Ahmir-Khalib Thompson on January 20, 1971 Philadelphia, Pennsylvania, he is best known as the drummer and joint frontman (with Black Thought) for the Grammy Award-winning band The Roots, who serve as the house band for The Tonight Show Starring Jimmy Fallon (since February 17, 2014). The Roots formerly served in the same capacity for Late Night with Jimmy Fallon before Fallon took over Jay Leno's spot on The Tonight Show. Questlove, also known professionally by ?uestlove, BROther ?uestion, Questo, Brother Question and Qlove), has produced for such artists as Elvis Costello, Common, D'Angelo, Jill Scott, Erykah Badu, Bilal, Jay-Z, Nikka Costa, Al Green, Amy Winehouse and John Legend. In 2000, he appeared with The Roots in the film Bamboozled (directed by Spike Lee). In 2008, Questlove collaborated with Nike to design the Questlove x Nike 1World Air Force 1 shoe. He again collaborated with Nike in 2011 to create a second shoe called Nike Questo, a sneaker that was a combination of four popular Nike designs. He is the co-author of the book Mo' Meta Blues: The World According to Questlove, a memoir with a twist. 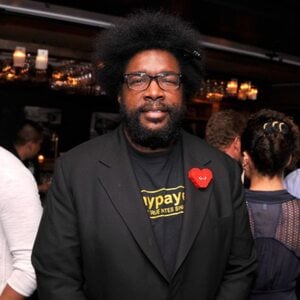