What is Quavo's Net Worth?

Quavo is an American rapper, singer, songwriter, music video director, and record producer who has a net worth of $26 million. Quavo is best known for being a member of the hip-hop trio Migos, and he has released three studio albums with the group, "Yung Rich Nation" (2015), "Culture" (2017), and "Culture II" (2018).

Quavo was born Quavious Keyate Marshall on April 2, 1991, in Athens, Georgia. His mother, Edna, worked as a hairdresser, and his father passed away when Quavo was just 4 years old. He grew up with his future Migos bandmates, Kiari Cephus (aka Offset) and Kirshnik Ball (aka Takeoff) in Gwinnett County; he is Offset's cousin and Takeoff's uncle. Quavo was the starting quarterback of the Berkmar High School football team during his senior year, and he dropped out of school a few months before graduation. In May 2020, he announced that he had graduated from high school at age 29.

Quavo, Takeoff, and Offset formed the group Polo Club in 2008 and later changed the name to Migos. The trio put out several mixtapes before releasing their first studio album, including "Juug Season" (2011) and "No Label," (2012). Migos' debut studio album, 2015's "Yung Rich Nation," reached #3 on the "Billboard" Top Rap Albums chart and #5 on the Top R&B/Hip-Hop Albums chart. They followed it with 2017's "Culture," which went Platinum in the U.S. and topped the "Billboard" 200, Top Rap Albums, and Top R&B/Hip-Hop Albums charts as well as the Canadian Albums Chart. Their third album, 2018's "Culture II," also reached #1 on all four of those charts, and their single "Bad and Boujee" (featuring Lil Uzi Vert) hit #1 on the "Billboard" Hot 100, Hot R&B/Hip-Hop Songs, and Hot Rap Songs charts and was certified 4× Platinum in the U.S.

In 2016, Quavo released the single "Champions," which featured Kanye West, Big Sean, Gucci Mane, Travis Scott, 2 Chainz, Yo Gotti, and Desiigner, and it went Platinum in the U.S. That year he was a featured artist on numerous tracks, such as Young Thug and Travis Scott's "Pick Up the Phone" (2016), Post Malone's "Congratulations" (2016), and DJ Khaled's "I'm the One" (2016), which was certified 8x Platinum in the U.S. and topped the charts in several countries. In 2017, Quavo and Travis Scott released the album "Huncho Jack, Jack Huncho" which spawned nine singles. Quavo's solo studio album, 2018's "Quavo Huncho," was certified Gold in the U.S. and featured the Platinum single "Workin Me." Quavo was featured on Madonna's 2019 single "Future" (which he co-wrote), and he performed the song with her at the Eurovision Song Contest 2019 grand final. 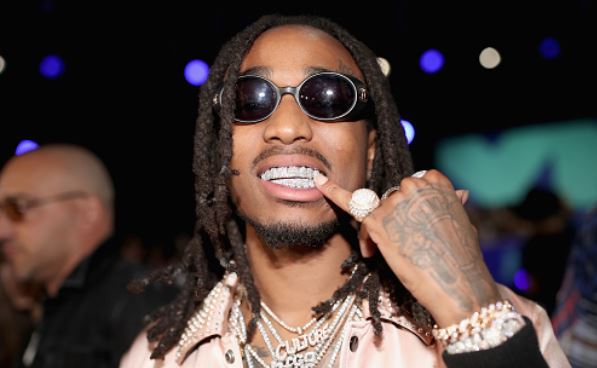 Quavo began a relationship with rapper Saweetie in September 2018, and in March 2021, Saweetie stated on social media that the two had split up. That month, a video surfaced that showed an incident from 2020 in which Quavo and Saweetie got into a physical altercation. In April 2015, a Migos concert at Georgia Southern University was stopped by authorities, and all three members were arrested. Quavo was charged with possession of marijuana, possession of an unspecified Schedule II narcotic, possession of a firearm during the commission of a crime, and possession of a firearm in a school safety zone and released on bond. He received a 12-month sentence after pleading no contest to misdemeanor marijuana charges, but the sentence was suspended after he paid a fine. Quavo played in the 2018 NBA All-Star Celebrity Game and received the MVP Award after scoring 19 points. He scored 27 points in the 2019 NBA All-Star Celebrity Game, and at the 2020 All-Star Celebrity Game, he played on Team Stephen A. and performed during the halftime show. 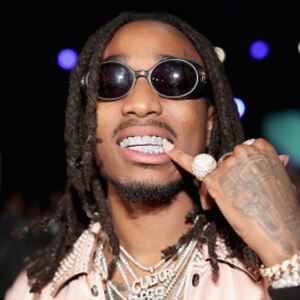