Playboi Carti Net Worth and Salary: Playboi Carti is an American rapper who has a net worth of $9 million. He is known for his mumbled lyrics and experimental style. After gathering a cult following early in his career, Carti achieved mainstream success after signing to Interscope Records. His first studio album, "Die Lit," peaked at number three on the US Billboard 200 and was certified gold by the RIAA. In 2017, Playboi Carti was named one of the highest paid figures in hip-hop, reportedly earning more than $8 million in 12 months.

Early Life: Playboi Carti was born on September 13th of 1996, in Atlanta, Georgia. He went to North Springs Charter High School in Sandy Springs, Georgia. Before rapping, Carti wanted to become an NBA star to make a name for himself. He played on the high school team but quit after a disagreement with his head coach. Playboi Carti regularly skipped classes at school to work on his music or go to his job at H&M. After high school, he quit his job and focused on music.

Playboi Carti began releasing music in 2011; however, much of his early work has been deleted from the internet. After Carti decided to pursue music full-time, he moved to New York. While staying at his drug dealer's apartment, he met a member of the hip-hop collective ASAP. In 2015, after a show in Texas, ASAP Rocky began mentoring Playboi Carti. He then began to attract attention with his singles "Broke Boi" and "Fetti," which he published on Soundcloud.

During this time, Carti was collaborating with artists in Atlanta's underground rap scene, including Yung Bans, Lil Yachty, and Ethereal. He also went on tour with ASAP Ferg and Lil Uzi Vert. By the end of 2018, Playboi Carti signed a major record deal with Interscope Records.

Career: After signing with Interscope, Carti released his debut mixtape in April of 2017. The release garnered attention from numerous music publications, including Pitchfork, Spin, XXL, and PopMatters. The mixtape climbed to number 12 on the Billboard 200 and featured the hit singles "Magnolia" and "Woke Up Like This." In support of the mixtape, Playboi Carti went on tour with Gucci Mane and Dreezy.

In May of 2018, Carti released his debut studio album "Die Lit." The album peaked at number three on the US Billboard 200, and a few months later, it was certified gold by the RIAA. The album featured Nicki Minaj, Chief Keef, Young Thug, and Lil Uzi Vert. At the end of the year, Playboi Carti announced that he was working on his sophomore album.

Over the next two years, some of Carti's new songs were leaked onto the internet and accumulated tens of millions of streams. In April of 2020, he officially released his first new track since 2018 with his song "@Meh." The song peaked at number 35 on the Billboard Hot 100. The following month, he was featured in Drake's single "Pain 1993," which debuted at number seven, becoming Playboi Carti's first top-ten on the chart.

In December of 2020, Carti released the 24-track album "Whole Lotta Red," which debuted at number one on the US Billboard 200. Guest performances on the album included Future, Kanye West, and Kid Cudi.

Relationships: In 2018, Playboi Carti began dating the Australian rapper Iggy Azalea. In 2020, it was reported that Azalea gave birth to their son, Onyx Kelly.

Legal Issues: In 2017, Carti was arrested on domestic abuse charges after an argument with his girlfriend outside of the Los Angeles International Airport; however, the charges were later dropped. In 2018, Playboi Carti was fined £800 after punching a driver in Gretna, Scotland, during a tour. Carti was arrested in Georgia in 2020 on drug and gun charges but was released the following day on bonds. 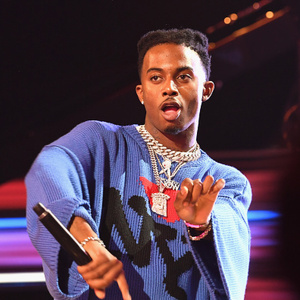