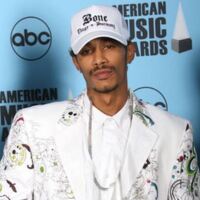 Layzie Bone net worth: Layzie Bone is an American hip hop and rap artist who has a net worth of $3 million. Layzie Bone, also known as Steven Howse, was born in Cleveland, Ohio, and began his professional hip hop career performing with his group, B.O.N.E Enterpri$e. They recorded one album in 1993 called, "Faces of Death", Then Layzie, his brother Flesh-n-Bone, their cousin Wish Bone and Bizzy Bone went to Los Angeles to work with Eazy-E. The famed producer and musician had seen one of their concerts in Ohio, and took an interest in them. Once in Los Angeles, they were renamed Bone Thugs-n-Harmony. Layzie Bone has recorded eight albums with Bone Thugs-n-Harmony, three of which have been certified Platinum, and one of which has been certified Gold. He has also released several albums as a solo artist. His eighth solo album, "Perfect Timing" was set to drop sometime in 2016 but this did not end up happening. In 2013, Layzie Bone faced legal issues related to paternity test. A former girlfriend sued Layzie for child support related to a toddler that is allegedly the rapper's son. Layzie was arrested over the charges.