How much is Kirko Bangz Worth?

Kirko Bangz net worth: Kirko Bangz is an American rapper, record producer, singer, and songwriter who has a net worth of $6 million. Kirko Bangz was born in Houston, Texas in August 1989. From 2009 to 2016 he released a total of 10 mixtapes. Kirko Bangz released his debut studio album Fallin' Up Mix in 2015 and the album Playa Made in 2016. His most popular single "Drank In My Cup" reached #1 on the US Rap chart as well as #5 on the US R&B/Hip-Hop chart and #28 on the Billboard 200 and was certified Platinum. Bangz also released the singles "What Yo Name Iz?", "Keep It Trill", "Hoe" (featuring YG and Yo Gotti), and "Rich" (featuring August Alsina). Kirko Bangz has also been featured on the popular singles "Young & Getting' It" by Meek Mill and "Walk On Green" by French Montana. He has also collaborated with other artists including Slim Thug, Paul Wall, Fat Joe, Mary J. Blige, Chris Brown, Kid Ink, T-Pain, DJ Khaled, Tyga, Ace Hood, Travis Porter, Gucci Mane, Waka Flocka Flame, Young Scooter, Joe Budden, Funkmaster Flex, Wyclef Jean, Ty Dolla Sign, Fabolous, and more. 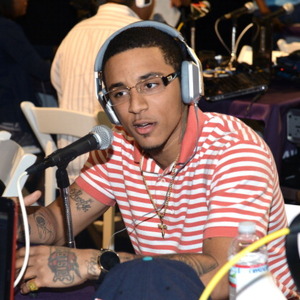