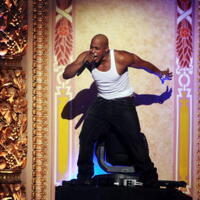 Sticky Fingaz net worth: Sticky Fingaz is an American rap artist, actor, director, and producer who has a net worth of $1 million dollars. Sticky Fingaz, also known as Kirk Jones, was born in Brooklyn, New York, and began his professional rap career in 1991. He was invited to join his cousin Fredro Starr's group, Onyx. Once he signed on with Onyx, the group, which consisted of Fingaz, Starr, Sonsee, and Big DS, released their album "Bacdafucup" in 1993. The album was a hit, going multi-Platinum and spawning the hit song, "Slam". They have since released four more albums. In 2001, he released his first solo album. A concept album that followed a fictionalized account of his own life and death, his solo debut was lauded by critics, but failed with fans. His second solo album was even less well received. In addition to his rap career, he has appeared on various television shows, including "Platinum", "Over There", "Next Friday", "The Shield", and he starred in the short-lived, "Blade: The Series".