Kid Ink Net Worth: Kid Ink is an American rapper who has a net worth of $2.5 million. Brian Todd Collins (aka Kid Ink) was born April 1, 1986 in Los Angeles, California. Kid Ink got his start in music as a teenager in after-school music programs making beats and learning about record production.

He cites his inspirations as producers Timbaland, Pharrell Williams and Swizz Beatz. Following a few years of working as a record producer, Ink chose to pursue a career as a rapper full-time at age 22. Formerly known as 'Rockstar', he rose steadily by releasing a series of four mixtapes during 2010 and 2011. XXL magazine was impressed enough to list Kid Ink beside the likes of Danny Brown and Macklemore in its Freshman Class feature for 2012. That June, Kid Ink released Up & Away, his first proper studio album, via Tha Alumni. Although it featured beats from several producers-including Ned Cameron, Cardiak, JahLil Beats, and the Amazinz-there were no guest verses, and therefore no disruptions in Kid Ink's nonchalant flow. It peaked at No. 20 on the Billboard 200 chart and reached No. 3 on the publication's Top R&B/Hip-Hop Albums chart. After another mixtape, he signed to major-label RCA and released his second effort, My Own Lane, in 2014; Tyga, Chris Brown and Pusha-T all made guest appearances. Kid Ink has dozens of tattoos on his face, arms, hands and torso. He got his first tattoo when he was 16. His favorites include portraits of his mother and grandfather tattooed on his chest and a tiger inked on the front of his neck, which represents his Chinese symbol. 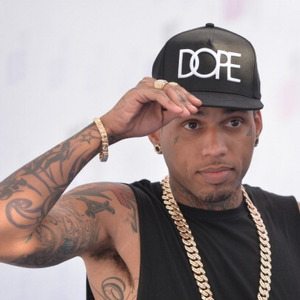