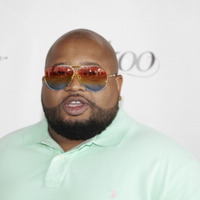 Jazze Pha Net Worth: Jazze Pha is an American vocalist, songwriter and producer who has a net worth of $18 million dollars. Born Phalon Anton Alexander on April 25, 1974 in Memphis, Tennessee, Jazze Pha is the founder and CEO of Sho'nuff Records and the son of the bassist for the Memphis band Bar-Keys, James Alexander. He was named Phalon in honor of his father's former band mate, Phalon Jones (another member of the Bar-Keys) who was killed in a 1967 plane crash. Jazze Pha first reached commercial success as a producer in 1996 with Tela's club anthem Sho Nuff. Pha also played synthesizer on that track. During his career Pha has collaborated with the likes of Tupac Shakur, Lil' Wayne, Ludacris, Nate Dogg, Nelly and Trick Daddy. In 2004, he helped Ciara launch her career, producing her 2004 hit single 1,2 Step featuring Missy Elliott. Pha has made guest appearances on at least 50 albums to date, to include such artists as Cee-Lo Green. Predominantly a producer of what is known as southern rap, Pha's handiwork has led to top 20 hits for artists Field Mob and Ciara.