What was Jam Master Jay's Net Worth?

Jam Master Jay was an American musician and DJ who had a net worth of -$1 million at the time of his death. Jam Master Jay was best known as a member of the hip hop group Run-DMC. In the 80s, the group helped bring hip hop into the mainstream with such hit albums as the self-titled "Run-D.M.C.," "King of Rock," and "Raising Hell." Jam Master Jay died in 2002 after being shot in a recording studio in New York City under circumstances that are still shrouded in mystery.

At the time of his death, Jay was reportedly $500,000 in debt to the IRS and was wrestling with a "vast mortgage" connected to his home and recording studio. He also allegedly owed a large debt to a neighborhood man named Curtis Scoon. One of the theories regarding Jay's death is that he was killed after having an argument over money with Scoon. Another theory involved Jay's business partner Randy Allen who allegedly stood to receive a $500,000 insurance settlement after Jay died.

Jam Master Jay, whose real name was Jason William Mizell, was born on January 21, 1965 in the Brooklyn borough of New York City to Connie and Jesse. He got into music early on in his life, picking up the trumpet at the age of three. Mizell went on to learn how to play the drums, guitar, and bass, and performed in several bands as well as at his church. When he was 10, he moved with his family to the Hollis neighborhood of Queens; in the borough, he attended Andrew Jackson High School. Mizell soon discovered turntables, and at the age of 13 began deejaying. He was also involved in more unscrupulous activities, such as committing burglaries with a group of local miscreants. Ultimately, an encounter with an armed guard ended his crime spree.

Mizell lived for a while in Atlantic City, New Jersey, where he was taught how to crossfade by turntable master DJ Def Lou Hauck. Feeling confident in his growing DJ skills, Mizell began playing in front of audiences at parks and bars. He also played drums and bass in a number of garage bands.

In 1983, Mizell joined Joseph Simmons and Darryl McDaniels, both also from Hollis, Queens, to form the hip hop group Run-DMC. Simmons adopted the moniker "Run," while McDaniels took on the name "D.M.C"; Mizell, meanwhile, became DJ Jam Master Jay. In 1984, the group released its self-titled debut album, which made it to number 53 on the Billboard 200. More significantly, it became the first-ever rap album to be certified Gold by the RIAA, helping to bring the genre of hip hop into the mainstream. Run-DMC continued its success in 1985 with its second album, "King of Rock," which went on to earn a Platinum certification. The album launched the singles "King of Rock," "Jam-Master Jammin'," "Can You Rock it Like This," and "You Talk Too Much." Next, in 1986, Run-DMC had its greatest commercial and critical hit with "Raising Hell." Peaking at number three on the Billboard 200, it launched the group's most famous single, the Aerosmith collaboration "Walk This Way." The album is widely credited with ushering in the golden era of hip hop. On "Raising Hell," Jam Master Jay contributed drums, keyboards, and bass.

Run-DMC released its fourth album, "Tougher Than Leather," in 1988. Although it failed to match the success of "Raising Hell," the album was certified Platinum, and launched the hit singles "Run's House" and "Mary, Mary." Run-DMC next released "Back from Hell" in 1990; notably, it features Jam Master Jay rapping for the first time. In 1993, Run-DMC found renewed success with "Down with the King," which reached number seven on the Billboard 200 and earned a Gold certification from the RIAA. Run-DMC didn't release another album until 2001's "Crown Royal," the group's seventh and final studio album. 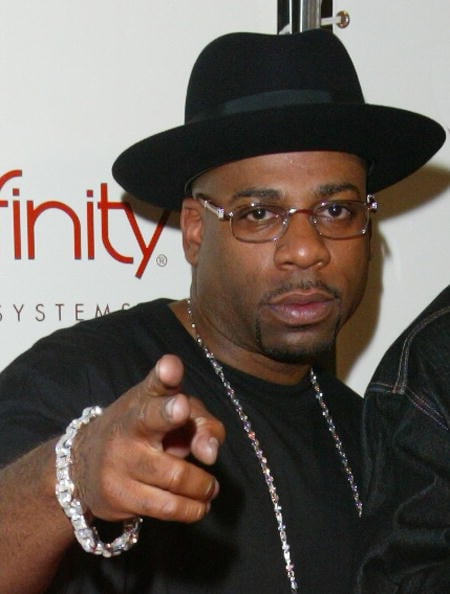 Mizell founded the record label JMJ Records in 1989. The label's first act was the Afros, which released its first and only album, "Kickin' Afrolistics," in 1990. JMJ Records went on to sign such artists as Fam-Lee, Onyx, Jayo Felony, Suga, and a young Curtis "50 Cent" Jackson. One of the label's greatest successes was with the hip hop group Onyx, which had a Platinum hit album with "Bacdafucup" in 1993, and a hit single with "Slam."

Mizell had three sons: Jason Jr., Jesse, and TJ. He also had a daughter named Tyra.

On October 30, 2002, Mizell was fatally shot in a recording studio in the Jamaica neighborhood of Queens, New York City. Urieco Rincon, who was in the room with him, was also shot, but survived.

In 2003, convicted drug dealer Kenneth McGriff and some of his friends were investigated for targeting Mizell, reportedly because Mizell had violated an industry blacklist of 50 Cent. Later in the year, investigative journalist Frank Owen published an article in Playboy alleging that the murder was in fact due to a drug deal gone awry. In 2007, federal prosecutors identified Mizell's friend Ronald Washington as a murder accomplice.

In response to the ongoing mystery around Mizell's murder, a documentary entitled "ReMastered: Who Killed Jam Master Jay?" was released in 2018 as part of Netflix's "ReMastered" series. Ultimately, the documentary does not arrive at a definitive conclusion as to the identity of the murderer. Meanwhile, former prosecutor Marcia Clark spotlighted Mizell's homicide in a 2018 episode of her A&E show "Marcia Clark Investigates the First 48." Advances seemed to have been made in 2020, when Ronald Washington and Karl Jordan Jr. were indicted in connection to Mizell's homicide. However, the men pleaded not guilty.