How much is JabbaWockeeZ Worth?

JabbaWockeeZ Net Worth: JabbaWockeeZ is an eight-member, all male, hip-hop dance crew who has a net worth of $25 million dollars. JabbaWockeeZ is comprised of Ben "B-Tek" Chung, Joe "Punkee" Larot, Chris "Cristyle" Gatdula, Kevin "KB" Brewer, Rynan "Kid Rainen" Paguio, Jeff "Phi" Nguyen, Phil "Swagger Boy" Tayag and Tony "Transformer" Tran. Best known for winning the first season of America's Best Dance Crew, they were initially formed under the name "3 Muskee" which was comprised of Kevin "KB" Brewer, Phil "Swagger Boy" Tayag and Joe "Punkee" Larot. JabbaWockeeZ does not have a 'leader' and designs their choreography as a collective unit. JabbaWockeeZ auditioned as a seven-member group for the first season of America's Best Dance Crew (ABDC) because of crew member limits imposed by the show. They took home a $100,000 prize for winning first place in the show. Since winning, they have appeared in Pepsi and Gatorade commercials and performed on Dancing with the Stars, So You Think You Can Dance, The Ellen DeGeneres Show and Live with Regis and Kelly. In April 2010, they made an encore appearance on ABDC for the Champions for Charity episode and yet another appearance on ABDC during the season six finale before the new champions (I.aM.mE) were crowned. 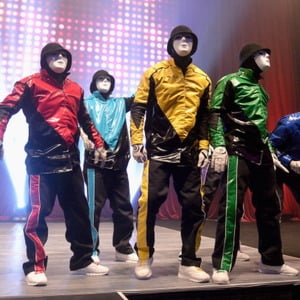