Insane Clown Posse Net Worth: Insane Clown Posse is an American hip hop duo who has a net worth of $30 million. The group consists of Violent J (Joseph Bruce) and Shaggy 2 Dope (Joseph Utsier). The two perform under their wicked clown personas and perform hardcore hip hop also known as horrorcore and are known for their elaborate live performances. They have had two platinum and five gold albums and sold over 6.5 million copies as of 2007. The duo has founded the independent record label Psychopathic Records and they have produced and starred in feature films like Big Money Hustlas and Big Money Rustlas. They have formed their own professional wrestling federation called Juggalo Championship Wrestling and formerly wrestled in WWF, WCW, and TNA. Their fans are known as juggalos and are said to be in the tens of thousands. The Insane Clown Posse sued the FBI because the National Gang Intelligence Center listed juggalos as a loosely organized hybrid gang. They have released a total of 14 studio albums. Their songs have often centered on themes such as the mythology of the Dark Carnival in which the lives of the dead are judged. 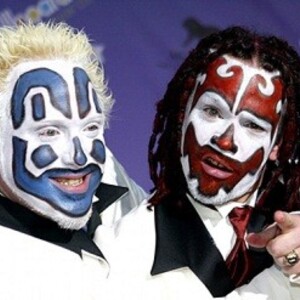