Hopsin net worth: Marcus Jamal Hopson, more commonly known by his stage name, Hopsin, is an American rapper, record producer, director, and actor who has a net worth of $4 million dollars. Known for using the internet to draw a fan base, he has released five studio albums and has collaborated with other artists including Tech N9ne, B.o.B, Travis Barker, Paul Wall, Insane Clown Posse, Brotha Hung Lynch, Kid Cudi, B-Real, Xzibit, Futuristic, and more. He has become known for his look featuring white contacts. He has had minor success with the singles "Sag My Pants", "Ill Mind of Hopsin 5", "Hop Is Back", "Ill Mind of Hopsin 7", "Crown Me", "Fly", and "Ill Mind of Hopsin 8".

Early Life: Marcus Hopson was born in Los Angeles, California on July 18, 1985 and was raised in the largely Hispanic neighborhood of Panorama City, Los Angeles. He attended James Monroe High School where he placed some special education classes. Hopsin became an avid skateboarder at age 12 and many of his music videos today feature him skateboarding. He began rapping at age 16. In 2004, he and a group of friends were arrested for vandalizing school property. What started out as a school prank led to them being held on $20,000 bail. Hopsin had dropped out of high school by that point and he was sent to Los Angeles County Jail where he spent a year.

Career: Hopson credits Eminem as the rapper who initially got him interested in hip-hop music. Upon his release from jail in 2005, he began to pursue a career in music. He purchased a microphone and installed FL Studio on his computer. Ruthless Records signed him almost immediately. Hopson's lead single from his debut album was released on May 27, 20098. Unfortunately, the relationship between label and artist was never successful, and he claims that he was not supported during production of his first album, "Gazing at the Moonlight", and that he was not able to hear any of the masters before it was released. "Gazing at the Moonlight" was finally released in October 2009 but to little promotion. He and Ruthless parted ways in 2009, and a year later, he founded his own record company Funk Volume, with Damien Ritter. Swizz, Ritter's younger brother and a former classmate of Hopsin, was the first artist to be signed to Funk Volume.  Shortly after launching Funk Volume, both Hopsin and SwizZz released a collaborative mixtape titled "Haywire" in June 2009 to promote the label.

Up next Hopsin released his first single, "Nocturnal Rainbows,"  off his upcoming second album. In October 2010, Hopsin released a music video on YouTube for the song "Sag My Pants," the second single off the next album. The music video became a YouTube success and holds over 54 million views as of 2021. His second album, "Raw", was released in the fall of 2010. In the spring of 2011, Hopsin went on a nationwide two-month tour to promote "Raw" with the I Am Raw tour.

Hopsin released the fourth video in his series of "Ill Mind of Hopsin" videos. The video became a viral sensation, wracking up over 13 million views. He has since been featured in two video games, performed on MTV2, and appeared on the cover of XXL Magazine.

Hopsin released the album Knock Madness in 2013 which reached #1 on the US Heatseekers chart and #7 on the US Rap chart. He released the album Pound Syndrome in 2015 which reached #4 on the US Rap chart.  In January 2016, Hopsin announced on social media that his label Funk Volume was "officially dead" due to recurring business issues and financial disputes with his business partner and co-founder of the label, Damien Ritter. In March of that year Hopsin released a diss track towards Ritter and Funk Volume called "Ill Mind of Hopsin 8."

Hopsin left Funk Volume after the song's release and created a new label Undercover Prodigy. He went on to release more singles with his new label, "Bout the Business," "Die This Way," "False Advertisement," and "Scrollin'." He announced in February 2017 that he was working on his next studio album and released two singles. He released the lead single to his fifth album in October 13 and released the album "No Shame" in November 2017. The album debuted at No. 42 on the U.S. Billboard 200 chart. Following the release of "No Shame," Hopsin went on to release music videos from the album "lll Mind of Hopsin 9," and released the singles "Low-Key" and "Hell's Carol" in December 2018.

In January 2019, Hopsin released a collaboration with Dax titled "You Should've Known." Hopsin later went on to release "The Old Us" and "Picasso" that spring. July 2019 saw the release of his new song "I Don't Want It." In the song, he announced that he would be taking a break from music to take care of problems in his personal life. He announced his return from hiatus via YouTube on February 16, 2020, and also announced an upcoming album. On April 21, he released a new single called "Covid Mansion."

Acting Career: Hopsin also forged an acting career and appeared as a background extra in movies and TV shows such as "John Tucker Must Die," "Even Stevens," "Lizzie McGuire," "Cold Case," "Malcolm in the Middle," "Gilmore Girls" and many others. He also appeared in "That's So Raven" for many years. However, he only had a speaking part one time over the course of those appearances. He also made an appearance as a rapper in the 2009 film "Fame." In 2015, he co-starred in the second season of the drama series "Murder in the First."

Personal Life: He has a son with Australian makeup artist Alyce Madden, but their relationship turned sour when she was pregnant. She put a restraining order on him to prevent him from meeting their son. Hopsin has suffered from bouts of depression and once walked out of a show to be on his own. 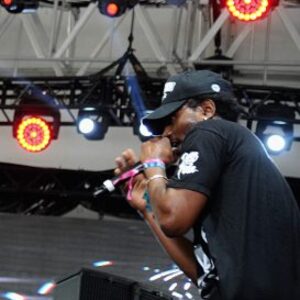