Gunna net worth: Gunna is an American rapper and songwriter who has a net worth of $4 million. Gunna was born in College Park, Georgia in June 1993. In 2013 he released the mixtape Hard Body under the name Yung Gunna. As Gunna he released the mixtapes Drip Season in 2016 and Drip Season 2 in 2017. His mixtape Drip Season 3 was released in 2018 and reached #20 on the US Rap chart and #25 on the US R&B/Hip-Hop chart. He released the mixtape Drip Harder (with Lil Baby) in 2018 which reached #4 on the Billboard 200 chart and #12 in the UK. He has also released the EPs Drip or Drown (with Wheezy) in 2017 and Drip or Drown 2 in 2018. Gunna's single "Drip Too Hard" (with Lil Baby) reached #4 on the Billboard Hot 100 chart. He has collaborated with several artists including Travis Scott, Gucci Mane, Lil Uzi Vert, Lil Durk, Drake, and more.

In May 2022 Gunna was arrested as part of a sweeping indictment that also involved fellow rapper Young Thug. According to the 180-page indictment, Gunna – real name Sergio Kitchens – allegedly committed felonies such as drug possession with intent to distribute and receiving stolen property. 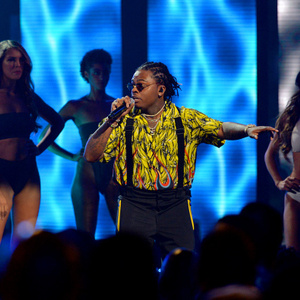