How much is Glasses Malone Worth?

Glasses Malone Net Worth: Glasses Malone is an American rapper who has a net worth of $800 thousand. Glasses Malone was born Charles Phillip Ivory Penniman on December 10, 1979 in Los Angeles, California and was raised in the Watts and Compton neighborhoods in Los Angeles County. His mother served a 25-year prison sentence for selling narcotics and Malone was a Crip gang member as a teenager. He began his career in the entertainment industry in 2003 and has recorded with such record labels as The Black Wall Street, Suburban Noize, Blu Division, Hoo-Bangin,' Cash Money and Republic. He has released two studio albums: Beach Cruiser and Glass House. He also appeared in the music video for Tha Dogg Pound's single Cali Iz Active and made a cameo appearance in the Tech N9ne video Like Yeah. Malone appeared on the soundtrack to Madden 2007 with a song called Right Now, produced by Scott Storch. On August 4, 2006, he appeared on MTV's You Hear It First. In late 2009, Malone accompanied Tech N9ne and hip-hop super-group Slaughterhouse on the K.O.D Tour. He was also featured on former Cash Money R&B singer TQ's 7th studio album Kind of Blue in 2010. Glasses Malone can be found in a specific version of Twiztid's 2012 album Abominationz as well. Glasses Malone also appeared on Big B new album Good Times & Bad Advice in a song titled Live Your Life. 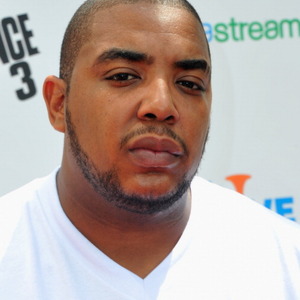