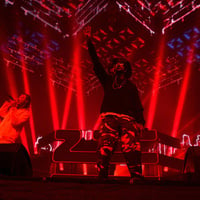 Flesh-n-Bone net worth: Flesh-n-Bone is an American rapper who has a net worth of $500 thousand. Flesh-n-Bone was born in Cleveland, Ohio in June 1973. He is best known for being a member of the rap group Bone Thugs-n-Harmony. As a solo artist he released his debut studio album T.H.U.G.S. in 1996 which was certified Gold and reached #8 on the US R&B chart and #23 on the US Hot 100 chart. Flesh-n-Bone has also released the albums 5th Dog Let Loose in 2000 and Blaze of Glory in 2011. Bone Thugs-n-Harmony released their debut studio album E. 1999 Eternal in 1995 and their second album The Art of War in 1997. Both albums were certified 4x Platinum and reached #1 on both the Billboard 200 and US R&B charts. Their album BTNHResurrection in 2000 also reached #1 on the US R&B chart and their albums Thug World Order in 2002, Thug Stories in 2006, Strength & Loyalty in 2007, and Uni5: The World's Enemy in 2010 all reached the Top 5 on the US R&B chart. The group also released the albums The Art of War: World War III in 2013 and E. 1999 Legends in 2016. Their most successful single is "Tha Crossroads" which reached #1 on the Billboard Hot 100, US R&B, US Rap, and New Zealand charts.

Legal Problems: Flesh-n-Bone has been no stranger to the justice system in the last decade. He has been arrested a number of times, mostly related to weapons charges. He served 8 years in state prison (on a 12 year sentence) for charges of assault with a deadly weapon. He was then arrested in March 2010 in Cleveland on a 10-year-old felony warrant.