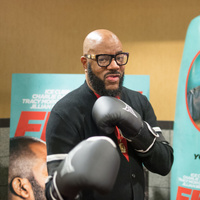 Ed Lover net worth: Ed Lover is a rapper, actor, musician, radio personality, and former MTV VJ who has a net worth of $5 million. Ed Lover built his net worth as an actor, rapper, musician and radio personality. Born James Roberts on February 12, 1963 in Hollis, Queens, New York, Ed Lover made a name for himself as the co-host of MTV's hip hop music program Yo! MTV Raps, along with the famous American rapper Doctor Dre. Apart from becoming the faces of rap for thousands of young viewers, the duo also starred together in 1993's hip-hop comedy Who's the Man, telling the story of two Harlem barbers who eventually turn into cops. The following year they went on to release their album Back Up Off Me!, which didn't live up to their expectations and was poorly received by audiences. Later, he became a radio personality on the New York-based Hip-Hop Radio Power 105.1 FM, in which he overused the word "bitches" and earned Oprah Winfrey's reprimand for that. As of late, he is the host of The Ed Lover Show on SiriusXM's Old Skool rap station BackSpin.