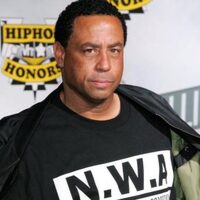 DJ Yella net worth: DJ Yella is an American DJ, music producer, and film director who has a net worth of $1 million. DJ Yella was born in Compton, California in December 1967. Yella is known for being a founding member of the gangsta rap group N.W.A. and was also a member of the World Class Wreckin' Cru. DJ Yella and Dr. Dre produced Easy-E's debut studio album Eazy-Duz-It as well as all three N.W.A. albums. DJ Yella worked as a producer with Ruthless Records after N.W.A. broke up. He has produced for artists such as J.J. Fad, Yomo & Maulkie, The D.O.C., Bone Thugs-N-Harmony, and more. In 1996 he released his debut solo studio album One Mo Nigga ta Go which was certified Gold. DJ Yella retired from music after his debut solo album and worked as a porn film director and producer. During a 12 year period he produced more than 300 films. DJ Yella released his follow-up album West Coastin' in 2011. He was portrayed by Neil Brown, Jr. in the 2015 film Straight Outta Compton. A lesson in hip-hop history, the movie details not only the roller coaster ride in association with the creation and subsequent takeover of super group N.W.A., but it also gives a fairly historically accurate overview of the creation and evolution of so-called "gangster rap" as a whole. While the overall level of truth contained within the film remains arguable, this musical biopic ranks Universal's 6th top opening of the year and also represents the best R-rated August film opening ever!