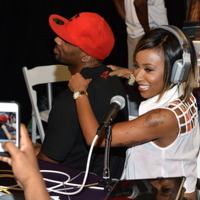 Diamond net worth: Diamond is an American rapper who has a net worth of $100 thousand dollars. Diamond was born Brittany Nicole Carpentero in Atlanta, Georgia in May 1988. Her mother is African American and her father is Puerto Rican. When she was 15 Diamond joined the group Crime Mob in 2004. The group released the albums Crime Mob in 2004 and Hated on Mostly in 2007. Their biggest hits were "Knuck if You BucK", which was certified Platinum, and "Rock Yo Hips". Diamond left the group in 2007 to pursue her solo career. She appeared on a remix of "My Chick Bad" by Ludacris in 2010. That same year she released her debut single "Lotta Money". She released the song "Hit That Hoe" with Waka Flocka in 2011 and also released the single "Buy It All". In 2012 she released the single "Loose Screws". Her debut album The Young Life was released in 2012 and featured the singles "American Woman" and "Love Like Mine". She has also released six mixtapes. Diamond will be featured on the new Oxygen reality series Sisterhood of Hip Hop in 2014. She was nominated for Best Female Hip-Hop Artist at the 2011 and 2012 BET Awards.