Devyne Stephens net worth: Devyne Stephens is an American music executive who has a net worth of $16 million dollars. Devyne Stephens was born in Atlanta, Georgia. He is the founder and owner of the record label UpFront Records. He started out as a rapper in the early 1990s as part of the group 90 Miles an Hour. He was signed to LaFace Records but never recorded an album. He worked as an imaging expert and choreographer for LaFace. Some of the artists he worked with include Toni Braxton, Pink, TLC, Usher, and Boyz II Men. He started UpFront Records in 2005. Stephens discovered Akon and signed him to his label. He has also signed Krave, Red Dirt, FA, B5, and Pat Muresan. UpFront Megatainment includes The Complex, which is a facility for artists and athletes that includes a rehearsal studio, photo studio, and fitness wing, Dreamland, which is an 18,000 square foot mansion that serves as a hotspot for Atlanta's exclusive events, Cartel Management which guides stars, Upfront Digital Media, Spotlyte Agency, and Upfront Mega Media. Stephens has also worked with Mariah Carey, Mary J Blige, Gwen Stefani, Jay-Z, Alicia Keys, Sean "P.Diddy" Combs, Sting and Ludacris. 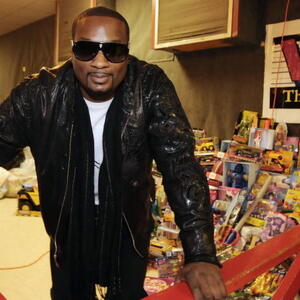