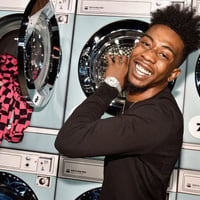 Desiigner net worth: Desiigner is an American hip hop recording artist who has a net worth of $5 million. Desiigner was born in Brooklyn, New York in May 1997. He is best known for his hit single "Panda" which reached #1 on the Billboard Hot 100, US R&B, and US Rap charts. The single also reached the Top 10 in Australia, Canada, Denmark, New Zealand, and the UK. Rapper Kanye West sampled "Panda" on his album The Life of Pablo and signed Desiigner to his label GOOD Music which is an imprint of Def Jam Recordings. Desiigner's debut studio album The Life of Desiigner was released in 2016. He started practicing his vocals in his school choir and at his church. Desiigner was shot at the age of 14 and decided to focus on his music career.