What Is Darryl McDaniels' Net Worth

Darryl McDaniels (also known as "DMC") is an American rapper and author who has a net worth of $40 million. McDaniels is a founding member of the legendary hip-hop group Run-D.M.C., along with Joseph "Run" Simmons and Jason "Jam Master Jay" Mizell. Run-D.M.C. released seven studio albums between 1984 and 2001, including the 3× Platinum "Raising Hell" (1986) and the Platinum "King of Rock" (1985) and "Tougher Than Leather" (1988).

Darryl McDaniels was born Darryl Matthews McDaniels on May 31, 1964, in Harlem, New York. Darryl was adopted by Byford and Banna McDaniels when he was 3 months old, and he grew up in a Catholic household in Hollis, Queens. In 1978, McDaniels taught himself to DJ after buying a turntables and a mixer with his older brother, Alford, and he began using the name "Grandmaster Get High." Darryl attended Manhattan's Rice High School and Queens' St. John's University. When McDaniels started writing his autobiography, Banna and Byford revealed that they were not his biological parents and that his birth mother was a woman named Bernada Lovelace. Darryl had always believed that he had been born in Hollis, but he learned that he had actually been born in Harlem. He decided to look for his birth mother and began working on the 2006 documentary "DMC: My Adoption Journey" with VH1. Since he didn't have access to New York's closed birth records, he hired an investigator, who found McDaniels' birth mother within six weeks. Darryl met his birth mother, Berncenia, who had been a "Harlem teen mom," and she told him, "I had always thought about you." In June 2021, McDaniels finally got his birth certificate, thanks to a reversal in the law that kept New York pre-adoption records private.

McDaniels formed Run-D.M.C. with his friend Joseph "Run" Simmons in 1983, and DJ Jason "Jam Master Jay" Mizell soon joined the group. They released their self-titled debut album on March 27, 1984, and it was certified Gold and reached #14 on the "Billboard" Top R&B/Hip-Hop Albums chart. Their follow-up, 1985's "King of Rock," went Platinum, and their third album, 1986's 3x Platinum "Raising Hell," hit #1 on the Top R&B/Hip-Hop Albums chart and #3 on the "Billboard" 200 chart. In 1986, Run-D.M.C. released a cover of Aerosmith's "Walk This Way," featuring vocals by Steven Tyler and Joe Perry on guitar, and it went Platinum and reached #4 on the "Billboard" Hot 100 chart. Another single from "Raising Hell," "It's Tricky," was certified 2x Platinum. Around this time, Darryl was drinking heavily, sometimes finishing off eight 40-ounce bottles of malt liquor in a single day, and he was arrested twice on charges of D.U.I. and public intoxication. In 1987, the group recorded the song "Christmas in Hollis" for the benefit album "A Very Special Christmas." They released their fourth studio album, "Tougher Than Leather," in 1988, and it reached #9 on the "Billboard" 200 chart and #2 on the Top R&B/Hip-Hop Albums chart. 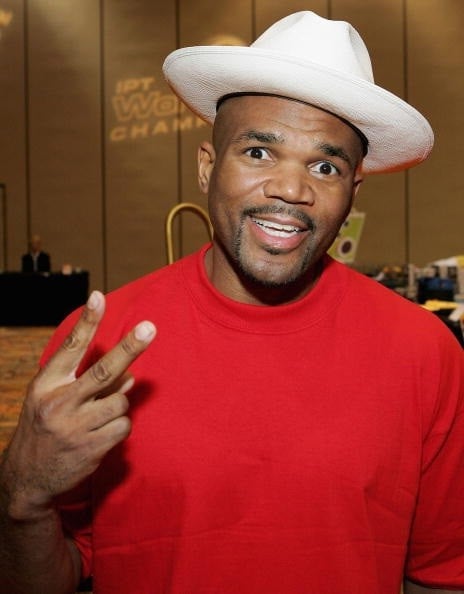 In 1990, Run-D.M.C. released the album "Back from Hell," followed by 1993's "Down with the King," which went Gold and reached #1 on the Top R&B/Hip-Hop Albums chart and #7 on the "Billboard" 200 chart." In 1997, McDaniels was suffering from depression and becoming unhappy with the demands of performing and touring. He used alcohol and prescription drugs to deal with his unhappiness, and after his voice starting giving out on tour, he was diagnosed with a vocal disorder called spasmodic dysphonia. At a time when Darryl was feeling suicidal, he heard the Sarah McLachlan song "Angel" and was inspired to reassess his life and write his autobiography. In 2001, Run-D.M.C. released their first album in eight years, "Crown Royal," then they toured with Aerosmith. Tragically, Jam Master Jay was murdered in 2002, and his murder was not solved until August 2020 when drug dealers Ronald Washington and Karl Jordan Jr. were charged with the crime.

McDaniels released the solo album "Checks Thugs and Rock N Roll" in 2006, and it featured a collaboration with Sarah McLachlan, who he credited with saving his life. The album peaked at #87 on the Top R&B/Hip-Hop Albums chart, and he followed it with the solo EP "Back from the Dead" in 2017. In 2009, he appeared in the documentary "The People Speak," and in 2011, he co-founded the record label IME Records with producer Wade Martin. In 2014, Darryl released the graphic novel "DMC," which he co-wrote with Damion Scott. In 2016, McDaniels released the album "The Dark Project" with the band Fragile Mortals (who were previously known as Generation Kill), and that year he had a cameo on "Saturday Night Live" during a "Christmas in Hollis" parody. In recent years, he has performed on albums by Solus Deus, Caparezza, and DeLiverance, and in 2021, Hip Hop Public Health released "Community Immunity: A Rap Anthology about Vaccines," which consists of five animated videos featuring Darryl to "increase COVID-19 vaccine coverage in communities of color."

Darryl married Zuri Alston on September 28, 1992, and they welcomed son Darryl Jr. on July 27, 1994. In 2006, McDaniels co-founded The Felix Organization with fellow adoptee Sheila Jaffe, who is an Emmy-winning casting director. The Felix Organization is dedicated to providing "inspiring opportunities and new experiences to enrich the lives of children who are growing up in the foster care system," and in September 2006, Darryl was honored with the Congressional Angels in Adoption award. He has served on the Board of Directors of the charitable organization Children's Rights, and in 2010, he was honored at the Fifth Annual Children's Rights Benefit for his "passionate commitment to the most vulnerable among our nation's children."

Run-D.M.C. received a Grammy Lifetime Achievement Award in 2016, and "Raising Hell" earned a Grammy nomination for Best R&B Performance by a Duo Or Group with Vocal in 1986. In 1987, they won two Soul Train Awards, Best Rap Album for "Raising Hell" and Best Rap Single for "Walk This Way," and received a nomination for Album of the Year – Group, Duo, or Band for "Raising Hell." The group earned American Music Award nominations for Favorite Soul/R&B Band/Duo/Group (1987), Favorite Soul/R&B Video for "Walk This Way" (1987), Favorite Rap/Hip-Hop Artist (1989), and Favorite Rap/Hip-Hop Album for "Tougher Than Leather" (1989). In 1987, they  earned MTV Video Music Award nominations for Best Stage Performance in a Video and Best Overall Performance in a Video for "Walk This Way."