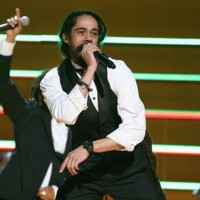 Damian Marley net worth: Damian Marley is a Jamaican reggae singer and songwriter who has a net worth of $20 million dollars. Damian Marley was born in July of 1978 to legendary Reggae artist, Bob Marley and Cindy Breakspeare, who won the title of Miss World in 1976. Though he had a number of half siblings, 10 from his father and two from his mother, Marley was the couple's only child together. He is Bob Marley's youngest child, while his mother's two other children are younger than Marley. He was only 2 years old when his father passed away. With a strong musical background within his family, Marley began singing and performing at a young age. When he was 13, he helped form the Shepherds, a musical group who opened the 1992 Reggae Sunsplash festival. The group disbanded shortly after, and Marley began to pursue his solo career. He has since released multiple albums and had various songs reach music charts, including US R&B and rap charts. Marley's nickname is Jr. Gong, after his father. Marley was originally named Damian, but his name was later changed to Damian at the request of his father due to religious principles. His son, Elijah, was born in 2009.