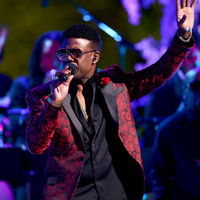 Dalvin DeGrate net worth: Dalvin DeGrate is an American musician, singer, and rapper who has a net worth of $4.5 million dollars. Dalvin Ertimus DeGrate was born in Charlotte, North Carolina in July 1971. He is best known for being a fourth of the R&B group Jodeci. The group formed in 1990 and consists of Mr. Dalvin (DeGrate), DeVante Swing (Dalvin's brother), K-Ci, and JoJo. Jodeci released three studio albums that all hit #1 on the U.S. R&B charts. Their first album was certified 3x Platinum, their second was 2x Platinum, and their third was Platinum. Their most popular songs include "Forever My Lady", "Stay", "Come and Talk to Me", Cry for You", and "Freek'n You". The group went on hiatus in 1998. In 2012 they were inducted into the North Carolina Music Hall of Fame. DeGrate rapped for the group and rarely sang lead vocals. He wrote songs and produced some of the group's tracks. DeGrate released his debut solo album Met.A.Mor.Phic in 2000. He signed with Def Jam Recordings to record his second album Met.A.Mor.Phic 2: The Rivalry Of A Singer & A Rapper. The album featured Method Mad, Ludacris, and Redman but was never released after a dispute between Dalvin and the label. He then formed his own label called DeGrate Productions and released Egomaniac in 2012. DeGrate was previously in a relationship with Tionne "T-Boz" Watkins of TLC.