Chance the Rapper Net Worth

in Richest Celebrities › Rappers
Chance the Rapper Net Worth:
$25 Million

Chance the Rapper net worth: Chance the Rapper is an American hip hop recording artist who has a net worth of $25 million. He has been one of the highest-paid rappers in the world at various times in recent years. Between 2017 and 2019 alone he earned more than $50 million.

Early Life: Chancelor Jonathan Bennett was born in Chicago, Illinois on April 16, 1993. His mother, Lisa Bennett, worked for the Illinois Attorney General, and his father Ken Williams-Bennett was an aide to then-Senator Barack Obama. The family lived in the middle-class neighborhood of West Chatham in Chicago. Ken Williams-Bennett started working in the Department of Labor during Obama's first term. Bennett had the opportunity to meet President Obama when he was a teenager. Growing up, he idolized Michael Jackson, and he credits his parents' constant playing of Billie Holiday, Sam Cooke, and other records for his early interest in music. He started listening to hip-hop after hearing Kanye West on the radio, and Chance began rapping in the sixth grade. Chance attended Jones College Prep High School and formed a hip-hop duo alongside a friend during his freshman year.

Career: Chance the Rapper is known for being one of the most successful un-signed musical artists of all time, having no major record label. He started to record his first full-length mixed tape in 2011, following a 10-day suspension for marijuana use in his senior year of high school. He released the single "Windows" in December 2011. He was highlighted in Complex magazine as 10 new Chicago rappers to watch. He released the mixtape, titled 10 Day, on April 3, 2012, to much local praise. Chance appeared on Childish Gambino's sixth mixtape, and Gambino asked Chance to open for him on his first concert tour of North America.

Chance's mixtape Acid Rap was released in 2013 and reached #26 on the US Heatseekers chart and #63 on the US R&B and Hip Hop Chart. It was well-received by critics and nominated for Best Mixtape at the 2013 BET Hip Hop Awards. It also made several lists of 50 Best Albums of 2013, including Rolling Stone, Pitchfork, and NPR's lists. In 2015, Bennett was listed on the Forbes 30 Under 30 list as number seven. He released his third mixtape, Coloring Book, on May 12, 2016. Streaming exclusively on Apple Music, the mixtape debuted at No. 8 on the Billboard chart and was streamed over 57.3 million times its first week. Coloring Book became the first release to chart solely based on streams. The album was met with overwhelmingly positive acclaim, and he launched his world tour to promote it on Sept 15, 2016. He performed in February 2017 at the Grammy Awards, where he had received 7 nominations and went on to win three Grammys.

Chance was nominated for an Emmy Award for Outstanding Original Music and Lyrics in July 2017 for a song he performed on Saturday Night Live with Kenan Thompson, Eli Brueggemann, and Will Stephens called "Last Christmas." Later that summer, Bennett headlined the third day of Lollapalooza in his hometown. Because of the crowds he drew, some estimated that it was the largest attended performance in Lollapalooza's history. On July 26, 2019, Chance the Rapper released his highly anticipated and long-awaited debut studio album The Big Day. It debuted at No. 2 on the Billboard charts, his highest-charting entry to date.

Activism: Despite his family's ties to the Democratic party, Bennett has expressed he is an independent voter. He did volunteer for Barack Obama's reelection campaign and has given political speeches at the University of Chicago Institute of Politics. Chance curated and headlined the Obama Foundation community event in 2017, which was the capstone of the yearly Obama Summit.

The mayor of Chicago named Chance the Rapper as Chicago's Outstanding Youth of the Year in 2014. Bennett works to support youth in Chicago by hosting open mic nights for local high school students in collaboration with Chicago Public Library. He started an initiative called Warmest Winter in 2016, which raised money to give out 1,000 coats and sleeping bags to homeless citizens. In 2016, Chance co-created a nonprofit called SocialWorks, which aims to create new youth programs for Chicago area residents. The artist is a strong activist in stopping gun violence. On March 6, 2017, Chance announced his intention to donate $1 million to Chicago Public Schools. In 2020, Chance will be honored with the UNICEF Chicago Humanitarian Award at its annual gala.

Personal Life: Bennett resides in Chicago. He is a practicing Christian and refers to Jesus in many of his songs. He lived briefly in North Hollywood, sharing a house with fellow musician James Blake, but described the city and his time there as "ungodly." Chance did many recreational drugs in his formative years but has since quit and says he no longer smokes or drinks alcohol. He began dating Kirsten Corley in 2013, and the couple has two children, Kensi (b. 2016) and Marli (2019). The two briefly broke up in 2016, but reconciled and were married on March 9, 2019. 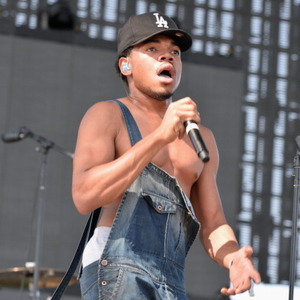